Woody Guthrie’s family will celebrate his 100th birthday with a tour.

We compiled all of this week’s tour date announcements in one handy column.

Bowery Presents has easily cemented themselves as the premiere concert promoter in the New York City area, booking shows in their fully-owned and operated venues as well as places like

We keep our eyes peeled for new tour dates announcements each week and compile them on Tuesdays for this handy column… Back in 2005, Clap Your Hands Say Yeah were

This year at Hidden Track, we concocted a little experiment for our year-end Best Albums of 2009 list. Instead of picking the old fashioned way – subjectively – we opted for something a little different: a collaborative, collective list that incorporates the opinions of everybody here at HT.

To begin, we devised an all-encompassing list of around 100 nominees and populated it in a Google spreadsheet – essentially anything that anybody who writes for Hidden Track liked at all, made the list. Then we invited our crew of writers to independently vote on the whole list (omitting anything unfamiliar) on a scale of 1 to 20 (20 = five stars). We ended up with 33 voters with varying degrees of familiarity with the nominees; some folks voted on just about everything, while some just a few. From there, we eliminated anything that did not receive at least three votes, calculated the average scores, and sorted it. We took the top 25 scores and presto: the Hidden Track 25 Best Albums of 2009. No bullshit, no big opinions; just the results.

Skinny: Reservoir showed in Fanfarlo a number of immensely talented musicians who swap instruments, successfully incorporate unconventional tackle like the clarinet, trumpet, violin, melodica, even the saw, and write some amazing orchestral indie rock/pop songs. While all of the material comes across easy and beautiful, perhaps the best indication of what’s to come from this young juggernaut band is the album’s instrumental closing lullaby, Good Morning Midnight, which in a mere 1:26, could put both mom and baby to sleep.

The demise of former ultra-hyped blog buzz band Clap Your Hands Say Yeah may have been a bit exaggerated by the same sources that had previously hailed them. The Brooklyn-based 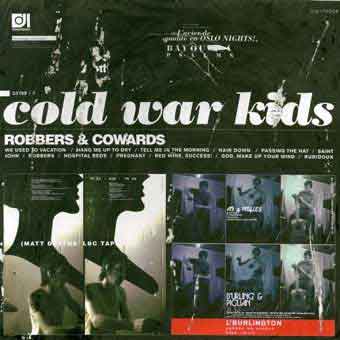 Thanks to the blogosphere, certain bands have suddenly been hot Monday and cold by Friday; just ask The Arctic Monkeys, Clap Your Hands Say Yeah and Tapes 'n Tapes. The new kids on the blog, Cold War Kids are out to prove that “longevity” has a place in the hot today, cold tomorrow world of indie bloggers. Judging by their stellar debut Robbers & Cowards, you might find yourself on the bandwagon, even if you find their praise "unjustly deemed."