Last month we brought you news of Beck’s latest project called the Record Club, where the musician planned on teaming up with whomever he could grab to head into the 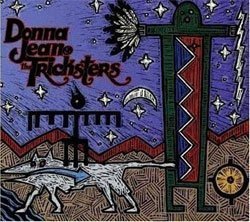 The first CD of the collaboration between Donna Jean Godchaux-Mackay and The Zen Tricksters is greater by far than the sum of its parts. Rather than merely an alliance of a former Grateful Dead vocalist and a once and future Grateful Dead cover band, Donna Jean & the Tricksters is a logical extension of the former's main influences and the band’s natural inclination to improvise.