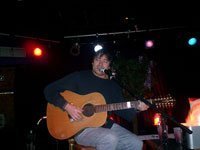 The Samples: Past, Present and Future (Interview With Sean Kelly)

With humble origins in the bars of Vermont, hard earned recognition in the small theatres of Colorado, critical acclaim on the national touring circuit, a major player on the HORDE tour and ultimately sold out Red Rocks shows which featured an unknown opening act named the Dave Matthews Band; Sean Kelly and The Samples have had a long and colorful road the past 15 years.