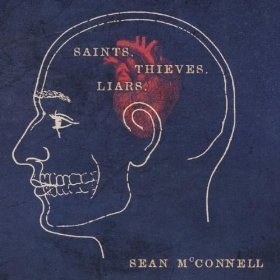 Relatively unknown to mainstream success, singer/songwriter, Sean McConell has been writing and recording music for over 10 years.  McConnell’s songs have been covered by everyone from American Idol contestant, Jason Castro to country superstar, Tim McGraw and he has exploded in the Texas music scene.  Sean McConnell delivers his most accessible and strongest album to date with Saints, Liars, and Thieves, which blends his Americana/R & B sound with introspective lyrics alongside a soulful vocal rang.  McConnell’s sound is very unique in that it pulls from soul, country, folk, and R & B but it his beautiful lyrics and touching songs that separate him from most mainstream music out there right now.