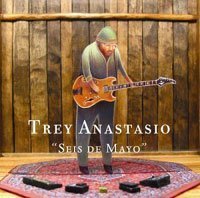 In 1999, Phish’s Trey Anastasio started touring solo and experimenting with arrangements other than the standard rock four-piece. The first tour was a straight-up power trio, but then he began to add horns and various layers until it stabilized with the current ten-piece band. No matter the lineup, it has always seemed he had a full orchestra playing in his head. On his new release, Seis de Mayo, we finally get to hear some of these songs the way he had always envisioned them.