Into the Wild: Directed by Sean Penn

With 2007 welcoming the 50th Anniversary of Jack Kerouac’s On the Road, it’s only fitting that Christopher McCandless’ journey to a destination unknown made it to the big screen.  McCandless’ two year adventure was documented in the 1996 best seller Into the Wild, by Jon Krakauer, and has since served as modern-day thesis for self-discovery.

After graduating from Emory University in 1990, McCandless donated his savings of $20,000 to OXFAM, burned his social security card and headed west on a two year journey that saw him abandon his yellow Datsun in the Arizona desert, kayak the Colorado River to Mexico, work the grain fields of South Dakota, jump trains, reside in vagabond hippie communes and eventually wander to Alaska for his final “great” adventure.  Without communicating to his family of his whereabouts, McCandless vanished his former identity and lived under the cocky pseudonym “Alexander Supertramp,” beginning a new life without a career, money and with minimal human interaction.

Four months after setting foot upon his Alaska voyage, McCandless starved to death in the remote, abandoned Fairbanks City Bus 142.  Although he can be considered a martyr to many and a stubborn fool to others, McCandless’ story is one of courage, adventure and self-preservation, serving as an inspiration to many, including director/actor Sean Penn.

Penn who had first read Into the Wild in 1996, immediately wanted to turn the story into a film, but it wasn’t until a couple years ago that McCandless’ family gave Penn the go-ahead.  Penn, in a recent interview in Outside magazine mentioned, “The story just touched a chord. One part was trust issues in a family and society at large, but the greater aspect was this wanderlust that everybody shares in."

Emile Hirsch, known for his role in Lords of Dogtown, nails the role of McCandless from the patchy facial hair, wirey frame, thick reading glasses and losing 41 pounds for the film’s final scenes. Considering all the public has physically seen of McCandless is a weather beaten, gaunt self-portrait in the inside cover of Krakauer’s book, Hirsch heroically captures McCandless’ imagined likeness with stubborn charisma and youthful curiosity.

Penn, did nothing to cheapen the story, shooting at 35 different locations in the U.S. and Mexico, many of which were the same sites that McCandless visited, including a dead-on re-creation of the infamous “bus” shot at a similar locale in the 49th state.  Penn even went so far as to shoot the scene where McCandless gets dropped off on the Stampede Trail in Alaska by electrician Jim Gallien by using the real Jim Gallien in the movie.  Penn, also listed the real Wayne Westerberg, who hired McCandless to work at his grain elevator in South Dakota to be a driver on the film set.  Eddie Vedder’s folksy soundtrack sets the Easy Rider mood, with his versions of “Hard Sun” and “Society” delicately narrating the protagonist’s struggles and triumphs.

Penn shuffles Into the Wild from McCandless’ final four months in Alaska to his previous mainland adventures, allowing the story to come full circle. Although Hirsch is the star, Into the Wild is bolstered by the dynamic supporting cast, all of whom demonstrate the lasting impact McCandless had upon each person he met, most of whom only spent a few days with him.

Vince Vaughn is the jovial man’s man Westerberg, while Hal Hollbrook brilliantly plays Ronald Franz, a widowed 80 year old who befriends McCandless and offers to adopt him in an emotional farewell. In between, Penn digs into the dysfunctional McCandless family, where the parents (William Hurt and Marcia Gay Harden) demand the expected rewards of suburbia – materialsm and privilege – exposing the underlying reasons for Chris’ rebellion and departure from the status quo.

As McCandless strives to “kill the false being within,” he makes us ask if paying the ultimate price of one’s life, can answer that question. If he made it out alive, McCandless would have been  another survival story and perhaps a new Thoreau. At the end of the 140 minute picture, Penn’s Into the Wild accomplished what he originally set out to do– grip you in the heart. 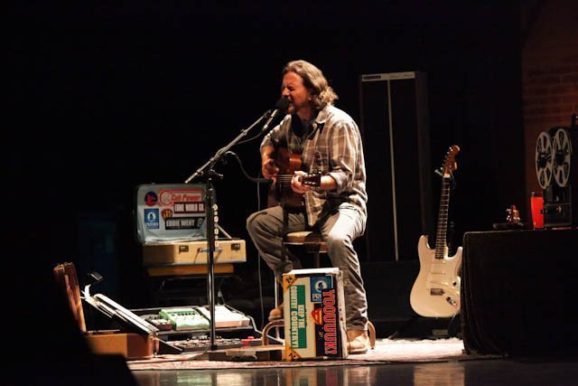