When you think of Van Halen, the one word that comes to mind is excess.  On the stage and on the small screen they always seemed insanely over the top. They once dubbed their 1982-83 outing in support of Diver Down the “Hide Your Sheep” tour.  No wonder they initially caught the eye of Gene Simmons in 1976.

But after seeing Van Halen in concert, without all the overdubs and with a “a little space” between the instruments, you are immediately struck by how great they are musically.  Eddie Van Halen is still a guitar-wielding behemoth. Beyond the quotes of “Magic Bus” and “Dazed And Confused,” you could really hear a wide variety of influences in their sound, in particular the blues and Latin elements.  Who knew that a self-described good-time party band had more to them.

Age may have slowed David Lee Roth a bit, but he’s still got the swagger that earned him a permanent place in the front-man pantheon.  From the opening notes of “You Really Got Me,” it was obvious what Eddie and Alex were missing all these years.  The setlist Van Halen has been playing since their tour began in September covers all aspects of their catalog.  Jubliant sing-alongs like “Beautiful Girls” and “Dance The Night Away” were mixed in with nuggets like “Mean Street” and “Little Dreamer.”

Eddie’s son Wolfgang, the only alteration to the classic line-up, held his own on bass.  There have been rumors that his backup vocals, along with the synthesizer tracks, were prerecorded bits from the departed Michael Anthony.  Complaints aside, the main attraction of this tour is to see David Lee Roth fronting the band he helped make classic.  Beyond the short hair and the slower gait, there seems to be a little humility mixed in with Diamond Dave’s bravado.  He seems to be truly appreciative of the opportunity presented to him by the Van Halen brothers and the fans.  His fall from grace following his departure has been well-documented.  His arrest in Washington Square Park for a petty pot deal, his foray into magic on the Las Vegas strip and his short-lived run as a radio shock jock all melted away once he did that first roundhouse kick.  Before beginning “Ice Cream Man,” Roth shared a little anecdote about partying back in the suburbs which put the last three decades into context.

That’s not to suggest that any of the showmanship has been lost.  Roth didn’t jump on the Tarzan swing or straddle the inflatable microphone that came for the “Jump” finale.  But hearing him rip into “Hot For Teacher (with that barrage of drums from brother Alex) or Ain’t Talkin’ ‘Bout Love” was more than worth the wait as was “Panama,” fresh off being featured in this summer’s hit Superbad.

It would also be remiss not to mention Eddie’s eleven-minute odyssey on guitar which featured bits of “Cathedral,” “Eruption” and any other instrumental he’s ever played.  There were times during his solos that he seemed to be playing three guitars at once, but this was unreal.  I haven’t seen anything like that since the last time I watched Jimmy Page in The Song Remains The Same.  The true guitar hero is becoming a dying breed.  Enjoy this one while you can. 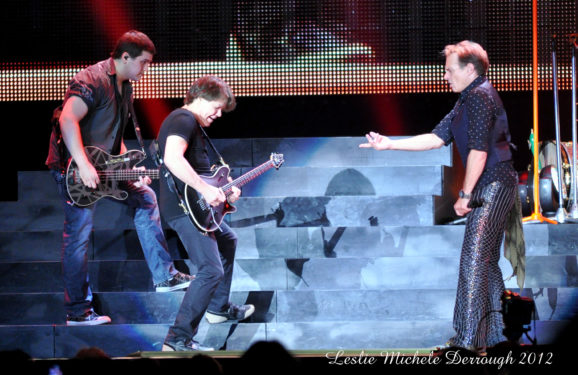 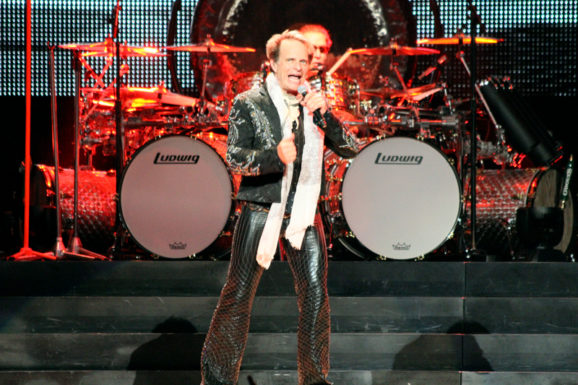