Louisville, Kentucky’s Forecastle Festival just wrapped up its 11th annual weekend, which allowed tens of thousands of fans to experience over 50 artists (over a variety of genres) during the course of three days at the 85-acre Waterfront Park. The festival offers a unique experience in several ways — one being the location, with the Ohio River flowing behind the main stage, and the city of Louisville looming in the backdrop. Culture and art from the area are represented, as several local vendors set up their homemade wares inside the festival, while some eccentric attendees roam the grounds dressed as weirdo Where The Wild Things Are-style mascots, and others spent their days hoisting and parading a giant mannequin of local hero Hunter Thompson. The wide variety of bands that play across the four separate stages can sometimes cause conflict, with certain artists playing at the same time. Though it was impossible for one person to attend each show, we’ve still compiled a list of the top ten favorite acts that we witnessed throughout the weekend.

Though it’s sometimes challenging for a rap artist to engage an outdoor crowd at a mixed-genre music festival, Big Boi managed to captivate the entire audience during his Friday night set on the Boom Stage. “Sir Lucious Left Foot” sported an injured left knee from a mishap at a previous concert (a totem to the high level of intensity of his live performance), but didn’t allow the hindrance to affect him, as he fueled the festival grounds with Outkast classics “Rosa Parks” and “Ms. Jackson,” and received equally positive crowd reactions to solo efforts like “Shutterbug.” The hip-hop legend didn’t miss a beat while performing from the confines of a large red and gold throne, spitting signature fast-paced barrages of lyrical flow for the duration of his memorable set.

On the first day of Forecastle, Old Crow took to the stage and performed their unique blend of old-timey bluegrass and modern alt-country to eager festival goers. The string-band plucked their way through an assortment of original material, proving that older songs like “Cocaine Habit” can really get a crowd moving, and “Wagon Wheel” can still sound fresh in a live setting. Traditional cover songs were also played (a common staple in Old Crow’s live performances), including a wonderful rendition of Woody Guthrie’s “This Land Is Your Land” and an ode to the home turf of the festival with Karl Davis’ “Kentucky.” The twangy harmonies managed to stay sweet throughout the entire energetic, front porch style jam-session, as a perfect Louisville sunset decorated the backdrop.

Early on Saturday, the threat of an oncoming storm prompted Forecastle staff to evacuate the festival grounds. The safety precaution upset several attendees, causing many to rush out of the gates and migrate towards distant parking garages. Others sat below the shelter of an overhead interstate bridge, ignoring the warnings while slow-sipping their 16-ounce beers and staring at the Mast stage waiting for the clouds to disperse. An hour later, the sky cleared, the gates opened, and Dawes welcomed fans back to the festival with their 45-minute set of harmonious folk rock. The band’s short set-list briefly touched on all three of their albums, ranging from the more upbeat, festival-ready cuts like “From a Window Seat” and “If I Wanted Someone” to the calming, down-tempo “Peace In The Valley.” The glossy, clean tones meshed with the newfound sunshine — offering sweet relief, rescuing the day from what could have been an abrupt halt.

Kurt Vile’s Saturday evening set translated well to the several hundred fans that congregated around the Boom Stage to hear his offering of psychedelic-tinted indie rock. Vile, along with his backing band The Violators, performed several tracks from his recently released Wakin on a Pretty Daze. The watery riffs of “Was All Talk” and “KV Crimes” almost seemed to cool down everyone in the sweltering July heat, as their attention was diverted away from their own rolling sweat and onto the mellow sonic-slopes that leaked from the speakers. Vile tackled a slew of songs from 2011’s Smoke Ring for My Halo, his signature deep drawl lurched through “Baby’s Arms” and “Jesus Fever.” Half-way through the set, he exchanged his electric guitar for an acoustic, and everyone within listening distance seemed completely mesmerized by his delicate finger-picking, even those dining on the deck of the Joe’s Crab Shack, which stood to the left of the stage, outside the festival grounds.

Though a lot of the electricity and power from Zeppelin’s timeless classics are inevitably lost when Robert Plant performs with The Sensational Space Shifters, a slew of Zeppelin classic (“Black Dog,” “Going to California,” and “What Is and What Should Never Be”) still easily managed to give the Forecastle crowd chill bumps. The Led Zeppelin tracks were slowed down but still contained enough spark to send everyone into sing-along, head-nod, hip-twist mode, despite this being Day 3 of the festival (a time when most energy is waning thin). Plant also ran through a small selection of his solo material, including “In the Mood,” “Tin Pan Valley,” and “The Enchanter,” which allowed The Sensational Space Shifters to break through the stigma of not being Zeppelin. The band — along with Plant’s gracefully-aged voice — made one of the last concerts of the weekend also one of the most memorable.

The Black Keys closed out the festival on Saturday, delivering an enthralling performance during the late night hours. Energy soared as the band blistered through the last date of their 16-month El Camino Tour. Several mainstream rock-radio anthems, including “Gold on the Ceiling” and “Tighten Up,” were played with glowing excitement and intensity, as if they were genuinely still eager to perform them, not just going through motions. Aurbach and Carney also managed to still consume the crowd when they harkened back to their bluesier, more aggressive past, syncing perfectly for “Thickfreakness” and “I Got Mine.” Solemnity also encompassed the entire audience while the ghostly “Little Black Submarines” settled softly against the wind gusting up from the darkened Ohio River that flowed behind the stage. Though the setlist may seem somewhat predictable for The Black Keys, applause still erupted out of excitement as the first note of any well-known track rang out. I watched a small group of festival-goers attempt to leave the concert a little bit early to avoid the end-of-the-day traffic, but stop dead in their tracks and turn around as “Lonely Boy” started to play, unanimously deciding that the wait was definitely worth it.

The Avett Brothers’ festival-closing set on Sunday night ripped through an array of their extensive catalogue, satisfying old and new fans alike. They offered several tracks from their more polished, listener-friendly The Carpenter, including “Down With The Shine” and “Live and Die,” and also bookended their set with tracks from 2009’s commercial success I and Love and You (opening with “Head Full of Doubt/Road Full of Promise” and closing with “I and Love and You”). The Avetts still visited their bluegrass days as they plucked their way through the barnyard romp of “I Killed Sally’s Lover” from 2003’s A Carolina Jubilee, and leading the crowd to sway along to the easy living nature of “At the Beach” from 2004’s Mignonette. While this was not their first rodeo as a headlining act at the festival (They also headlined in 2009), The Avett Brothers still played their ensemble of string instruments with the same vigor as a band still trying to make a name for themselves. It was a perfect way to close out the festival, leaving all who walked out of the gates satisfied on their way back home.

The String Cheese Incident stepped up to their role as the festival’s only jam band headliner, delivering their psychedelic weave of progressive bluegrass to a crowd stuffed with devoted fans and first-time listeners. Their three-night stint in Louisville (Saturday’s being a concert at Louisville’s Palace Theatre, and Sunday being a bluegrass-collaborative effort known as “The Forecastle Incident”) allowed the Colorado group to cater their setlists to appeal to different crowds. Friday’s set was meant to be more accessible, so as to appeal to a larger demographic. This didn’t mean that they condensed any of the songs, over-stuffing tracks like “Song in My Head” and “On the Road” with the same amount of improvisational fluidity that made them so loved in the first place. Their cover of Aerosmith’s “Walk This Way” was received extremely well by the Forecastle audience, as the familiarity seemed to warm new listeners up to understanding the fun, jovial mood that embellishes String Cheese. As seemingly an ode to Kentucky, the band closed the first day of Forecastle (and their first set of the week) by revisiting their newgrass roots with the dynamic “Colorado Bluebird Sky.”

The Flaming Lips played the last set of the Boom Stage on Saturday night, broadcasting their surprisingly dark set to the ears of several absorbed fans. Almost half of the songs that were performed came from 2013’s The Terror. The onstage setup seemed way different from past tours, exchanging confetti and plastic-ball crowd surfing for a baby doll connected by tubes that lead singer Wayne Coyne span around his head and several metallic spaceship spheres that sat motionless on the stage. The dark vibes not only came in the form of eerie songs like “Butterfly, How Long It Takes to Die” and “Turning Violent,” but also during the onstage banter. At one point during the set, Coyne questioned “What would happen if a car flew off of the interstate bridge…?” (the section of road stretching right above certain areas of the festival). The audience was left dwelling on the hypothetical scenario as the band surged through Yoshimi Battles The Pink Robots track “All We Have Is Now.” A rendition of Devo’s “Gates of Steel.” and “Turning Violent.” Coyne finally answered his own hypothetical question by stating, “We would stop the concert and make sure they were OK!” before jumping into their classic, “Do You Realize??” Though their set had an ever-looming uneasy feeling to it, Coyne kept trying to ease the audience into the experience with a comforting plea of “Don’t be sad” (most notably before “Race for the Prize” off The Soft Bulletin, in which he repeated it several times). The Flaming Lips seemed to want to guide the audience through an exploration of the dark areas of their mind, the same way that they used to guide them through uplifting, confetti-filled celebrations. The journey caused a few to leave the set early and post-up for the Black Keys, but kept several thousand eager to see where the band would lead them.

The hometown hero of the Louisville Kentucky festival, Jim James played a perfect set consisting mostly of material from his solo effort Regions of Light and Sound of God. Though the concert was entirely different from one performed by My Morning Jacket (the band that heralded his initial fame), he was still able to completely broadcast his broad range of composition and performance during every song, notably with “State of The Art (A.E.I.O.U.)” and “Know Til Now,” which emphasized the R&B/rock fusion that glosses over the album. The backing band performed exactly as they should have, allowing Jim James space to showcase his soulful croon and spacey guitar/saxophone solos, yet they each filled in the instrumentation in all areas where a solid, steady jam was necessary. After the solo set finished, James finger-picked his way through My Morning Jacket’s soft, peaceful ballad “Wonderful (The Way I Feel), spreading positivity to the 10,000 fans that had expressed support through riotous cheers and thunderous applause for the entirety of the concert. He ended his set with a beautiful cover of The Beatles “Let It Be,” in which the entire crowd sang in unison when the chorus hit. Jim James seemed to be having as much fun as the crowd the entire time, a fitting tribute to the Forecastle spirit. 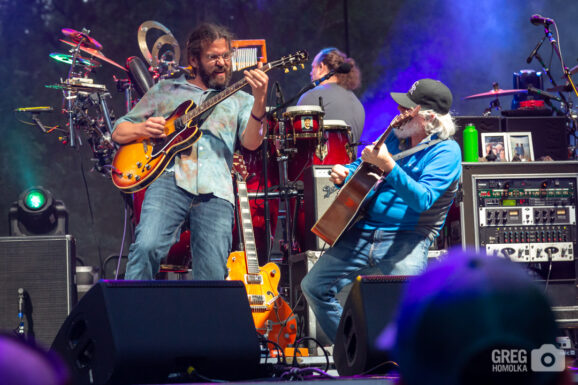 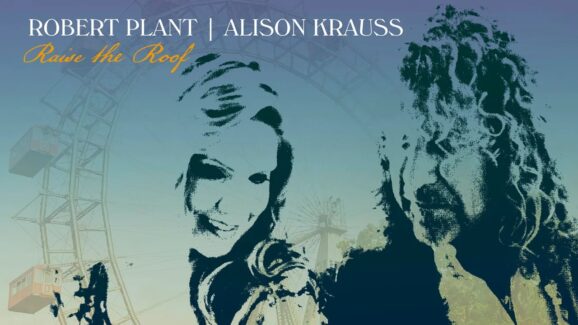