Chattanooga, Tennessee is surrounded by cities like Nashville, Knoxville, Atlanta, and even Huntsville — all of which are known for hosting popular, nationally-known acts. It used to be that if you wanted to see bands like The Black Crowes or The Avett Brothers, you had to go elsewhere. But that’s all changing, thanks, in part, to the city’s newest music venue: A former ice-skating rink, Track 29 is quickly transforming Chattanooga into a must-visit destination for live music, hosting major artists such as Jason Isbell, Jack White, and Band of Horses. The latest big-deal band to visit the Scenic City is Britain’s Arctic Monkeys. Supporting their new album, AM, frontman Alex Turner, lead guitarist Jamie Cook, drummer Matt Helders, and bassist Nick O’Malley made an appearance at Track 29 Monday night, Oct. 7th.

The show was close to sold out, if not completely, by the time the opening act – Deap Vally – went on. I was unfamiliar with Lindsey Troy and Julie Edwards, the female duo from San Fernando, California. But by the time they left the stage after their 20-something-minute set, I was a fan. And so was the rest of the crowd, who, instead of meandering around and chatting during the set, were all facing the stage – a sea of bobbing heads and fists – enamored by the guitarist and drummer who met at a needlework class and bonded over their mutual love of the blues. With a riveting sound somewhere between The White Stripes and Janice Joplin, Deap Vally demanded attention. And they got it.

Once the Arctic Monkeys walked out on-stage, they did not disappoint. Starting off their set with ‘Do I Wanna Know?,” they ripped through four songs before Turner introduced himself: “Hello Chattanooga! We are the Arctic Monkeys. My name is Alexander,” and then proceeded into “Teddy Picker” off the band’s second studio album, Favourite Worst Nightmare.

Turner, who sported a sparkly black sport coat, shimmied his hips while singing, and Cook, the famously outspoken member of the group, wore a killer black suit while playing his Gibson ES 335. The two displayed a level of retro cool that made them clearly stand out as the band’s poster-boys.

Turner broke out his acoustic guitar for “Cornerstone” marking the beginning of a two-song slowdown of tempo, followed by “I Wanna Be Yours.” “Old Yellow Bricks” was a fan favorite, receiving a roar from the crowd.

The band reached a nice balance between older songs and the the sleek new AM material. As a friend of mine pointed out, it was interesting to note the difference in sound between their songs off AM and songs from older albums such as Whatever People Say I Am, That’s What I’m Not. There seems to be, as my friend described, “a dirty, British, pub rock feel” to older songs like “Dancing Shoes,” compared to songs such as “Knee Socks,” the last of the band’s first set, which has more of an American-influenced dance-vibe to it. It’s difficult to put a label on what kind of music the band plays, as the style changes from album to album, which is what makes them so damn good. They displayed all of their influences on-stage — from garage-rock to post-punk, ’60s psychedelic rock, Brit pop, and even hip-hop.

For the first song of the three-song encore, the band broke out into “One for the Road,” the first track off of AM, which was met with thunderous applause.

Turner – who would periodically yell out “Chatt-a-nooga” throughout the show, prolonging each syllable as if to remind himself which city he was in – and his bandmates seemed to genuinely have a good time performing their first gig in Chattanooga; as did the crowd. Hopefully, it won’t be their last.

One for the Road
Do Me a Favour
R U Mine?

Below, check out Amy Fletcher‘s photo coverage of both bands: 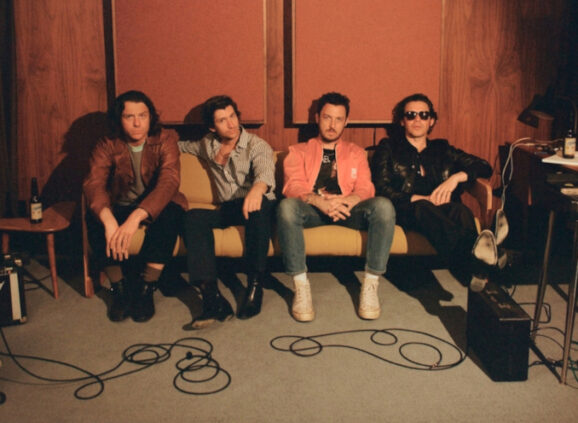