Our relationship with art changes over time. In our instantaneous iPhone age, we don’t live with albums or movies or TV shows or books like we used to. With Re-Reviews, we re-explore our relationship with a piece of pop culture — and how that relationship evolves over time. We dismiss some art unfairly — or prematurely. Perhaps certain songs or bits of dialogue didn’t resonate because of our mood or our position in life. On the other hand, perhaps our adoration of some childhood favorite is clouded by nostalgia. Does this even matter?

I heard the news of Neutral Milk Hotel’s reformation while scrolling through Twitter during my lunch break at work. I remember reading the article on a random music blog, checking out the tour dates, and then reflecting on how anti-climactic the entire announcement seemed. If this had happened in 2009, during the peak of my Neutral Milk Hotel obsession, I would have skipped the rest of the day of work in celebration, purchased as many tickets for the tour that my student loans would allow, and then listen to assorted poor-quality bootlegs until my ears bled. But this wasn’t how I expected to feel whenever I used to scour the Elephant 6 message boards late at night for any news concerning the inevitable reunion. I wasn’t fazed.

Like most, my fandom sprouted after falling into 1998’s In the Aeroplane Over the Sea, sinking deeper into the quicksand with each listen. After discovering the mythos surrounding the record, and Jeff Mangum’s seceding breakdown, it only spurned me to delve deeper into their catalogue, beginning with On Avery Island, and eventually leading to miscellaneous b-sides and (admittedly unlistenable) bedroom recordings, many of which consisted of abstract blood-curdled screams and harsh tape collages. In retrospect, it’s hard to believe that a band with two proper albums and one EP soundtracked my sophomore year of high school through my senior year of college, but the music created a feeling that nothing else could produce. I wore the grooves out of my vinyl (which was how you were supposed to listen to the albums), forced friends to listen on car rides, and vocally spilled sermons to anyone who asked for a simple music recommendation. I nerded-out to an embarrassing extent, but I couldn’t contain my admiration.

There was always a looming excitement associated with being a fanboy to a band on an indefinite hiatus, and the Salinger-esque isolation of the lead singer only added to the speculation. In 2008, Mangum appeared at the Elephant 6 Holiday Surprise tour in Lexington, KY (only an hour away from where I was living), and I felt as if I’d missed the rapture. Regrets aside, this proved to me that he was still alive and able to play, which only lent itself to more hope that my favorite band could rise from the dead. In the following years, Mangum made more random appearances, showing up at small venues unannounced, and bootlegs surfaced showing that he could perform as well (if not better) than he could 10 years prior. The other members were still active in their own respective projects, showcasing that the ingredients were still around for a reunion.

During Mangum’s subtle re-emergence, the albums that I used to proclaim “could never get old”…actually got kind of old. My excitement for the music inevitably subsided after thousands of listens, and my focus shifted to wanting to see the songs performed live. This all came into fruition in 2012, when a Jeff Mangum solo tour was announced, and I was able to witness the songs I held in such high regard performed by the person that crafted them. Julian Koster even aided in the performance, and I went home from the concert with a feeling of conclusiveness, hearing songs live that I’d wanted to hear live for years, despite the fact that the other two remaining members weren’t there. Neutral Milk Hotel could now shift itself into a “nostalgic” band for me; the mysterious story was basically resolved.

This year, it was announced that the entire band would be performing on a global tour, but I still feel as if the Neutral Milk Hotel chapter of my life is closed. The gradual testing of the waters by Mangum took the surprise out of the announcement; he was the figurehead, and I’ve seen him.

But the Neutral Milk Hotel reunion does raise several questions. If they decided to record, how would new material sound 15+ years after their last album, which many consider to be a masterpiece? Does the band’s return to the stage destroy the intriguing mystery that once surrounded them?

During the height of Mangum’s reclusive era, he appeared in the Major Organ and the Adding Machine film, but wearing a lobster costume which concealed his identity. Now the enigma I once associated with the masked identity has fleeted, and I can’t help but think it was only Jeff Mangum wearing a lobster costume, no hidden reason for hiding his face, which I suppose may have been how it was all along.

The Return Of Neutral Milk Hotel – Long-Lost Band To Reunite 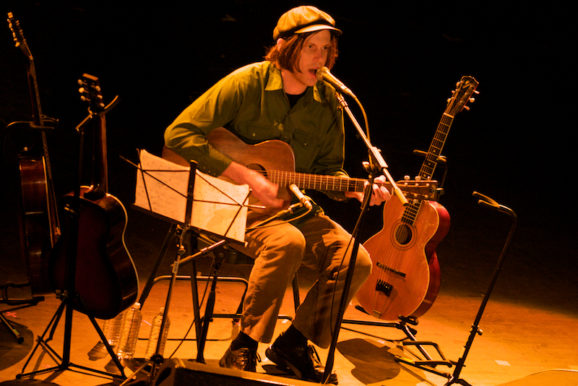