‘How I Met Your Mother’ Breakdown: ‘Bedtime Stories’

(SPOILERS AHEAD, so proceed with caution, you Mother lovers!)

With the holidays approaching, writers/showrunners Bays & Thomas insert a faintly holiday-themed episode into the mix. Told completely in rhyming verse, “Bedtime Stories” is reminiscent more of Twas The Night Before Christmas than Mother Goose (whom Marshall claims to be channeling). It’s possibly the most gimmicky episode yet, but it fortunately isn’t the worst.

Saturday 5 p.m, 25 hours before the wedding.

Marshall is so close to the Farhampton Inn, but the final stretch by bus seems interminable. Poor Marvin hasn’t learned how to fall asleep on a bus, and the only way Marshall and Lily have been able to get him to rest is by speaking in rhyming verse (usually via their Mother Goose nursery rhyme book). But Marshall doesn’t have the book and must rely on his wit — along with the rapping sensibility of Tony winner Lin-Manuel Miranda (of In the Heights fame), who is sitting across the aisle and very invested in Marvin’s sleep — to keep his son from crying all the way to the wedding.

The first story he recounts is “Mosby at the Bat.” In the not-so-distant past, Ted’s dating life was nonexistent — until sexy Lisa the Professor comes by his office to solicit him for teaching advice. They set up a date, but Ted is unsure if it’s a real date or not. As he debates each of her actions to determine her intentions, he gets hung up on the fact that she slept with a Yankee. He annoys her until she confesses the baseball player’s name. She reveals that it was Derek Jeter and shows him a photo of Barney in a Jeter t-shirt. Date or not, Ted is out.

The next tale is “Robin Takes the Cake.” At a cake shop, Robin runs into old flame Simon (James Van Der Beek), who is now engaged to be married. In a moment of low self-esteem, Robin steals Simon’s wedding cake and brings it home. Ted implores her to return it, but she rashly starts eating it instead. Not one to leave a task incomplete, she — along with Lily’s encouragement — eats down the entire cake (and somehow doesn’t vomit it up). To celebrate her accomplishment, she then does a kegstand courtesy of Barney.

The final tale is “Barney Stinson: Player King of New York City.” After bedding his latest conquest — Lisa the Professor — Barney realizes that he’s ended up on the East Side. As Barney reveals, his territory was restricted to the West Side per an agreement with the Council of Players. Various forms of Barney — with monikers like Tuxedo Charlie and Staten Island Lou — debate Barney’s punishment for breaking the gentlemen’s agreement. A Godfather-type Barney says the offended parties should be allowed to bed the women of their choice from Barney’s domain — Lily and Robin. To stop that from happening, Barney poisons them all with a friendly round of champagne, thus becoming the Player King of NYC.

With only five miles left to reach the Inn, the bus breaks down. A frustrated Marshall takes a moment to enjoy the fireworks with his son, which Future Ted informs us is Marvin’s first memory. The bus will take a couple hours to be repaired, so Marshall decides to walk the rest of the way.

While the gimmicky rhyming is great and implemented flawlessly, it does become tiresome. The episode also feels like treading water that’s even more stagnant than the treaded water that Once Upon a Time had been aimlessly floating in the beginning of this season. The stories (while beautifully tying together) are pointless vignettes that have zero bearing on character or story development. It’s a throwaway episode that’s disguised as fun storytelling.

“The last time he saw boobies was the screen test scene in Fame.” – Marshall making fun of Ted’s dry spell

“To boobies!” – Barney’s cheer before his councilmen drink the poisoned champagne

Next week features the laser tag rehearsal dinner, which should prove to be an awesome episode. 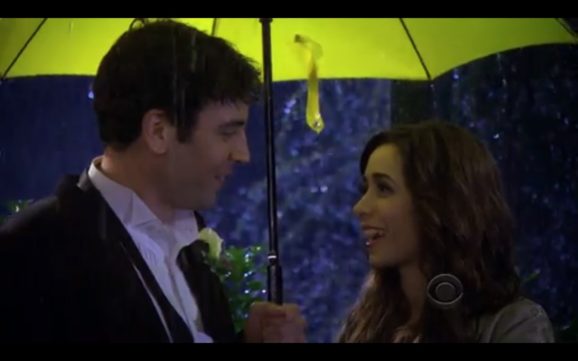 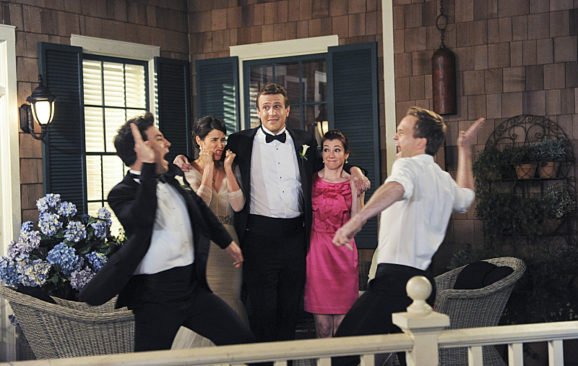 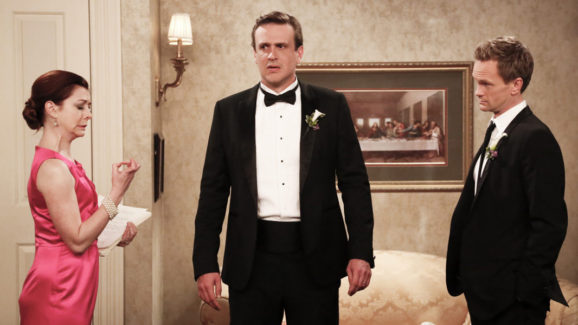