Listen to Reed Turchi’s gravelly, snarling voice and swaggering slide guitar playing and you’ll find his self-proclaimed style of “kudzu boogie” spreading over you and engulfing you much like that omnipresent Southern-growing plant it takes its name from. The music is steeped in the rhythmic dirty grooves of North Mississippi Hill Country blues brought to the world by the likes of Kenny Brown, RL Burnside, Fred McDowell, and even contemporary players like Luther Dickinson. Turchi, whose band carries his last name, cites all of those musicians as major influences. However, there’s one difference between Reed Turchi and the players he finds inspiration from: he is not from Mississippi. Turchi grew up in North Carolina where he came onto the style through different route than the musicians who came directly from it.

“My dad is a big blues appreciator, so there were always records around, and then my mom’s a real musician, she plays classical viola. So I was encouraged to play music,” says Turchi.

Growing up as a piano player, Turchi found himself drawn to “barrel house blues and boogie woogie kind of stuff, you know, the real churning kind of left hand rhythm work.” It wasn’t until he discovered the slide guitar that is the cornerstone of the Hill Country blues sound that he realized the piano wasn’t his instrument of choice.

“I really only switched to guitar to learn to play slide in that North Mississippi style. There are things on piano that you can’t do on guitar, and for me at least the one thing a guitar could do that a piano couldn’t was that slide effect. I think it’s a really [emotional] and nuance-based sound because the possibilities with it are so infinite. You break out distinct notes, keys, frets, and suddenly everything is up to your ear. Also, the way you attack every note and move between notes isn’t regimented but comes entirely fluid,” says Turchi.

As he continued to dive deeper into slide guitar Turchi developed a distinct style that, while obviously influenced by the greats of Hill Country blues, was all his own. This “kudzu boogie” paid tribute to those that laid the foundations but deviated through Turchi’s incorporation of musical elements like horns and organ. This can be heard most prominently on his newly released album, Can’t Bury Your Past (Devil Down Records). Based on his previous work, which stayed closer to traditional styles, Turchi acknowledges that some listeners may be surprised at his take on blues, but where’s the fun in imitating something that’s already been done?

“I think people might be hearing the new album and thinking it’s not quite pure in a way. That music has it’s own place and it’s own museum, but in terms of making new music there’s no reason to try to make something just so it can sit on a shelf next to some old record. You got to try new things,” says Turchi.

On Can’t Bury Your Past Turchi found inspiration outside Mississippi from other parts of the South, like the soulful Muscle Shoals, Alabama sound. In the case of the horns featured throughout the album, Turchi cites a specific Muscle Shoals recording that, like his own music, was not exactly traditional.

“One of the influential moments for the horns was when I had come across a couple of tracks that Duane Allman and King Curtis played on in Muscle Shoals and was really blown away by the power and energy and back and forth between the [saxophone and the] slide guitar – the phrases Duane would jam up against King Curtis and how responsive that was,” says Turchi.

Slide guitar definitely dominates Turchi’s music, but the instrumental work is complemented by lyrics and a rough vocal style that can come across as dark and ominous on first listen. However, repeat listens uncover a theme of taking on life’s hardships with an optimistic, confidence attitude. For Turchi, who admits that his lyrics are loosely “derived from experience,” much inspiration comes from life on the road touring as a solo artist. 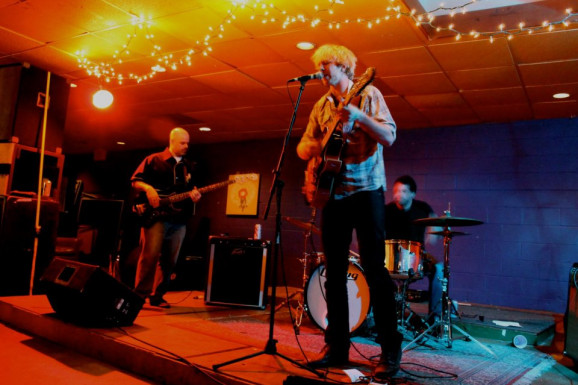 “Every [musician] after a point has to spend a lot of time on the road. For me a lot of that was all solo touring, which is really a much different and more isolating experience than being on the road with a group of guys. Running across people and places I sort of pick up hints of stories here and there that I try to weave into a character in a song,” says Turchi, noting that, beyond the road, he finds inspiration through mediums such as scenery, photography, and poetry.

Truly great artists find a way to honor traditions and pay homage to their influences, and those that stand out are the ones capable of striking a balance between what’s been done before and their own unique creativity. Given his North Carolina upbringing and musical background, Reed Turchi knows he isn’t following in the exact footsteps of Kenny Brown or Mississippi Fred McDowell, and if you listen to his music you’ll know he isn’t trying to recreate “authentic” Hill Country blues. Like that music and all great blues, Turchi captures an essence and emotional spirit that lets you know he is for real. With his “kudzu boogie” Reed Turchi functions as more of an innovator than a revivalist while still shining a respectable light on a criminally underappreciated style of music.