Everyone Orchestra Pangaea Project Benefits : Crystal Ballroom, Portland, OR May 16 & 17, 2007

When I think back to the years of the Pangaea Project’s annual benefits starring the Everyone Orchestra, one word repeatedly comes to mind…Community. It is a benefit for the Pangaea Project, a nonprofit organization dedicated to taking underprivileged students from the Portland area and giving them life experiences that sets them down into an international community thousands of miles away. There is the passion of the local community, with all of the Portland folk who support the cause by buying tickets, tee shirts, raffles, and just give donations out of the goodness of their own hearts. There is the community of talented musicians that Matt Butler masterfully assembles both featuring Portland musicians such as Tony Furtado, Darol Anger, Scott Law and Asher Fulero as well as musicians from the nation wide community such as Michael Kang, Stanton Moore, Jeff (Apt.Q258) Sipe and Steve Berlin. At these shows, we are all looking to support these students, and I am quite proud to be a part of that greater community.

The Pangaea project, now in their 5th year of existence, has really been making a difference in the lives of some of Portland’s youth. We were given the opportunity each night to see this in action, in both the slide show and short speeches that were given between the opening act and the Orchestra. These students were truly grateful to Pangaea for all of the opportunities they were given. As a teacher myself I am quite proud of Deb Delman Stephanie Tolk and Eric Scott’s efforts to take this concept and turn it into a living breathing and truly succeeding organization.

For two nights the Everyone Orchestra, led by Matt Butler and featuring an assortment of world class musicians, brought the Pangaea Project’s ambitious goals to our attention, and brought some killer music to our ears. From a musical perspective there was a distinct difference in feel between the two nights. There were the standard core of musicians who played both nights, and then there were the featured artists who provided the opening act as well as some choice jams alongside the heavily stacked Orchestra.

The first night brought Stanton Moore and his power trio featuring Will Bernard and Wil Blades, which gave the night a more jazzy and urban feel. The second night featured String Cheese Incident’s Keith Mosley and his friends as the opener, which brought a more emotional and organic response from both the crowd and the band. It seems whichever night you went, that you were in for a serious treat.

During the Everyone Orchestra sets there clearly is an abundance of jamming between these amazing musicians. This was especially true when Matt Butler takes up the white board to direct the jam, but as you can probably guess it wasn’t all improvisation. On the first night there were a couple of choice covers that rocked the house, including the Doobie Brothers’ "Long Train Running." With so many layers to the jam (nearly 15 musicians), there were new interpretations to this old classic that made this version particularly special. I especially liked Tony Furtado’s fluttery banjo fills in the mix.

Earlier that evening I bumped into Johnny Dwork of Peak Experience, who was standing at the door collecting Mad Libs answers to some unknown grammatical questions. He asked me for a noun, and for the sake of randomness, I chose Spagetti-os. Little did I know that he would be using those words during the E.O. set to describe the music and the musicians themselves. During his Mad Lib jam, I enjoyed seeing a couple of women ahead of me attempting to dance like Spaghetti-O’s.  It was a unique use of Mad Libs, and kudos to the musicians who were able to make their jam match the randomness of the verbiage of his speech.

The first night also had a thick and funky version of Robert Palmer’s “Sneaking Sally Through the Alley,” which ended the first night on a serious high. Led by the powerful vocals, of Jans Ingber, the funky keys of Asher Fulero, and backed by the full orchestra including Stanton Moore and Wil Bernard, this was the jam of the night and possibly the weekend.

Coming into these shows, I was most excited to see how Stanton’s chops would mix with the community groove produced by the Everyone Orchestra. There were some serious jams that night, including a sweet drum duel with Jeff Sipe. Yet to my surprise and delight the highlight of the weekend was the second night’s Keith Mosley and friends set.

Throughout the set different musicians ebbed and flowed from the stage. The strongest combination was Keith, Darol Anger and his flying fiddle, Scott Law, Michael Kang and Jeff Sipe. This super group was a musical force to be reckoned with, and I would be more than happy to see this combination again. Tye North also made an appearance and Keith welcomed him by offering up some heartfelt praise saying that Tye was his favorite bassist in the world.

The set featured a rotation of musicians that were intertwined to form a variety of sound. The song selection was chock full of classic covers such as The Band’s “Ophelia,” The Grateful Dead’s “Brown Eyed Women” and the set closer, The Rolling Stones’ “Loving Cup.” The set list was also sprinkled with a few S.C.I. numbers, including fan favorite “Cottonmouth,” which was a duet performed by Kang and Mosley and “Sometimes a River.”

The second night’s Cheese theme also spilled over into the E.O. set. I particularly was ecstatic to hear the full Orchestra melt into S.C.I’s “Rivertrance.”  This version was musically dense and powerful, even if it was technically unfinished. Another Doobie Brothers’ classic (“Listen to the Music”), was well played and was similarly strong to the previous evening’s homage to the Doobies. The set also ended with another Cheese standard “Desert Dawn,” which also received a rousing response, and made us break a collective sweat.

The weekend ended with a fired up version of “Lovelight” led by Johnny Dwork, which was part rock, part bluegrass, and part gospel revival. It was a hot way to end a raging weekend, and even when we thought the music was over they added another run through the scorching gospel to take us home in style.

Some traditions lose their magic after a few years, but thankfully the Pangaea Project benefit shows continue to bring the community together on so many levels, and continue to provide some of the most magical musical moments Portland sees each spring. 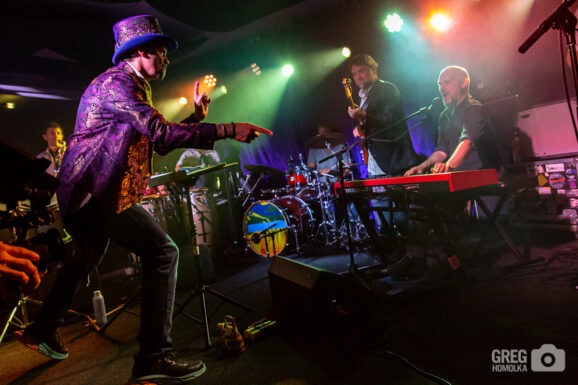