2002 was a sad year for the followers of  "Polyethnic Cajun Slamgrass," as we all witnessed cancer take one of the most influential banjo players of that time – Mark Vann.  Although the sadness was felt by Leftover Salmon fans around the world, it hit even closer to home for members of the band like Vince Herman.   Battling injuries and fighting back tears, Herman continued his journey towards musical excellence, determined to show his followers that the music which filled dancing souls for years had not died with Vann, but rather grew stronger each day!

In 2005, Vince joined Chad Staehly, a keyboardist introduced to Herman through John McKay (Brother of Leftover Salmon Keyboardist Bill McKay) in Boulder, Colorado for the Rainforest Action benefit show.  The sound they generated was surreaL, as the band could manage a large magnitude of genres.  Influenced by bands/artist such as the Grateful Dead, Bill Monroe, and many more, the band plays tunes from a genre with sounds all the way from steel drums to soul singers; a sound that they have coined “Americana Without Borders.”

Great American Taxi started touring and released their first CD Streets of Gold in 2007 with great success, and in 2009, they have done it again. The band, comprised of Herman, Staehly, Jim Lewin on electric guitar and vocals, Brian Adams on bass, and Chris Sheldon on the drums, released their second CD Reckless Habits, in early March.

With guest such as  Sheryl Renee, CoCo Brown, Shelly Lindsey, the Peak to Freak Horns, Barry Sless and banjo player Matt Flinner, Reckless Habits boast 13 tracks whose sounds range from one end of the spectrum to the other, from polka to bluegrass. Fully instrumental tunes such as “Big Sandy” gives you a beat to pull you off of your seat and onto your feet. Guitar pickin and fiddle playing to keep the sound moving while the drums and banjo ring a perfect thump that keeps toes curled.   Next thing you know country tunes like “New Madrid” fill the airwaves and demonstrate the full abilities that this band encompasses.  And of course, what Herman influenced album would be complete without a festival song? “Fuzzy Little Hippy Girl” boasts words that resonate through the bones of any professional granola’s stuck working in the corporate world: “I’m gonna put on a tie dye shirt, head down to the festival, leave that corporate world, dance while the moon is full!”  After listening to the tunes on Reckless Habits, it is very apparent that we will hear more of Great American Taxi down the road.

Get No Better – Great American… 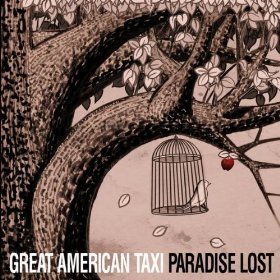