From iconic album covers, short form videos, full length concert films, video directorial/production, live concert photography and a plethora of musical portrait photography, Jay Blakesberg finds himself in the top percentile of rock music’s most  renowned photographers.  The Rolling Stones, The Grateful Dead, Tom Waits, Santana, Phish, and Neil Young are just a few of the artists that have let their guard down for Blakesberg to capture them in their most natural environments.  From the first Dead show he photographed in 1978 till now, Blakesburg has evolved his artistry through different mediums and has managed to remain entirely relevant in today’s tech-driven environment where a 35mm camera is no longer your only instrument. It seems everybody today thinks of themselves as photographer, but Blakesburg is quick to call out the “fake assignments.”  Glide recently had a chance to find out about his beginnings, photographing from the “pit,” and what it takes to make it as a music photographer.

I read that you started taking photographs of musicians at the age of 16. What was your Dad’s reaction when you told him you needed to borrow his camera to go take photos of the Grateful Dead?

He was fine. He trusted me…not sure why. There was certainly no clear path for him to see that lending me his professional 35mm camera could lead to a photography career for me.

At what point in your life did you realize that you could make a living out of taking photos?
It took a long time! Even after ten years of doing nothing else but shooting pictures for a living I was still always scared about going on vacation and missing a call for a shoot/job…but after a certain point you have to get over that fear. Also at a certain point I realized I was unemployable in any other capacity so had no choice but to make it work. And not as a "hobby" but as a sustainable business, which is why it’s important for younger shooters to understand the business side of things. Unless you don’t care about having another job to pay your bills and shooting for fun…but then you have to be careful about not ruining it for others by giving your photography away when you should be paid for it.

Have you met any musicians that were camera shy?

Many – but for many different reasons…some just dont know how to be in front of a camera, but then there are people like Neil Young, or Santana, or Jerry Garcia that did photo shoots for 30-50 years and are just "over it"…It might be the photographer’s first time shooting Neil and that photographer wants it  to be brilliant, but all Neil wants to do is go have lunch.

You have a few different books out and you can find your work all over the music world, in your eyes what makes a photo tell the story you want it to for a particular project?
I have always liked to tell a story with multiple images. That’s how my books flow…some people call that bad or loose editing…but when you go to a festival, or shoot a show, or spend ten hours doing a portrait session with an artist, it is impossible for it to boil down to one image. For portraits it’s different then a performance, and for documentary, it’s also different. But ultimately you want your photos to be engaging!

When you are in the pit is there competition between photographers or what is the relationship amongst you and them?
Of course there is, but those people are scared. I don’t feel like I am in competition with any of them, but they might feel differently towards me because maybe they want the assignment I have. There used to be a ton of "REAL" photo assignments for festivals, or shows…by real I mean print magazines or record companies, or artists that were paying you real money to work for them – where you actually had to be brilliant or you don’t get to work for them again. Now 95% of the photographers have "fake" assignments: mostly online and mostly for free or on spec for an agency. Most concert photography is very mediocre at best, so it’s become a cheap commodity. I used to do assignments for Rolling Stone Magazine where I had $5000 budgets to shoot a festival…today, you are lucky if you can get $500 from any magazine. So there is nothing to compete for anymore…maybe a few pennies here and there, maybe better access, but that doesn’t pay your bills.

What advice do you have for young photographers looking to get into the business of photography?

There is no money to be made as a live shooter. Learn how to light, be creative, make better more unique photos then others and maybe you can succeed professionally, creatively and financially.

You do portraits and live show shots, what are some likes and dislikes of both?

I love both – I don’t like shooting shows anymore if I can only have three songs, which is why 95% of what I shoot now are with artists that I have relationships with and can shoot whole shows, on stage, backstage, etc. I love doing portraits…it lets me be in control of the creative 100%. Artists today are not so used to great portrait photography because there is not as much of it because there are less magazine assignments. A lot of it is quickie backstage shots, and not spending 5-8 hours with an artist crafting a look and feel and vibe.

Before there was online marketing what were some ways that worked for you in getting your name out to musicians?
Word of mouth, photo credits, advertising in source books. You really are only as good as your last job/shoot, so kick ass and they will come back…be mediocre and you will have a hard time getting that next assignment…

I read that even if you are a fan of a band you would not let that come across in conversation with them. BUT, is there anyone you could not help it and said something funny or embarrassing out of being nervous?

Not sure if I would be nervous with anyone. I’m sure I have said some dumb shit… 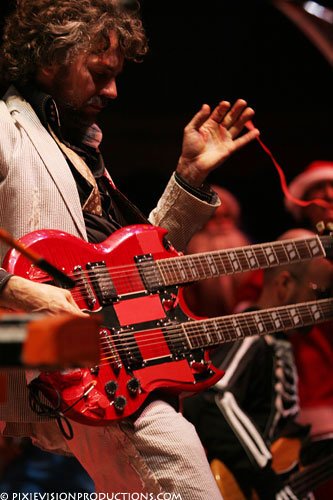