The co-headling Dawes/Blitzen Trapper bill made for a quintessential first week gig at Phoenix’s new Crescent Ballroom. The venue offers excellent sight lines, a small bleacher section, fairly priced drinks and a non douche-bag staff:  the venue appears to be built from an indie music blog posting – “how to build a kick-ass music room.” And here were two bands with experience playing both big and small stages, while playing with an experimental folk side influenced by Jackson Browne and the Flaming Lips.

So what are the guys from Dawes doing hauling their own equipment off the stage following their hour set?  After all they were Robbie Robertson chose them as his live backing band and they have earned praises from Browne, Chris Robinson and Conor Oberst.  But following their opening set, there was Taylor Goldsmith – almost a songwriting icon in his own right – helping clear the stage as Blitzen Trapper set up shop.  It won’t be much longer that this Los Angeles quartet will be unplugging and lugging.

Singing with slow Rick Danko pronunciation, Goldsmith radiates a bygone charm of convincing introspection – a bit of the lonesome wisdom of Neil Young and the sensitive charm of Jackson Browne.   Not even over 25 in age, he sings of trials and triumphs that could be or not be of his own-self.  Lyrically profound  and painfully obvious lines like “taking off my wrist watch to let time move as I please” and “follow my smile into its curves” gel effortlessly atop his slow aching voice: one of a few musicians who can deliver with such poignancy and authority on a small stage.

Although the term “Laurel Canyon”  is tired in describing Dawes, they are undoubtedly authentic: no kitschy keyboards, over sized eye glasses or ironic t- shirts.  Their recipe is simple and has been around since the 60’s: good lyrics and tasteful harmonies – both  ingredients that make for a career artist – not a one hit wonder/Foster the People.

From the tranquil opener “The Way You Laugh” to the Black Crowesy “When You Call My Name,” Dawes  showcased ten songs from their two albums – North Hills (2009) and Nothing Is Wrong (2011).   Many of the songs feature both Taylor and brother/drummer Griffin singing compelling harmonies. “The Western Skyline” dominated with its rich slow moving intro, where Goldsmith sings of finding his dreams without ever using tired clichés as he sung – “But oh, rue, my dreams did not come true; no they only came apart.”   The energy picked up for the crowd sing-along – “When My Time Comes” followed by the comforting “oooohs” of “Million Dollar Bill.”   When Dawes wrapped it up with their recently played Letterman tune– “Time Spent in Los Angeles” – the Crescent crowd was ostensibly won over.

Blitzen Trapper although tied to its Americana splendor, radiates a little more of the hip surroundings of its Portland, OR hometown.  And although not receiving the praise from the same superior elders as Dawes, the twangy opener “Love the Way You Walk Away,” followed into the powerful Beatles punch of “God and Suicide.”  Where their songs aren’t as lyrically direct,  Blitzen trappers drop enough clues to debate both cynical and sincere meanings.

Touring in support of its most recent album American Goldwing, Blitzen Trapper lead by Eric Earley, confidently leads the band through a ring of countrified indie rock. Striking an odd facial resemblance of the dark hair and eyebrows of Bon Scott, Earley sings with a Wayne Coynish pitch, while mainly playing acoustic guitar. Lead guitarist Marty Marquis shreds it up 70’s rock style with a tone that can fit in easily with Lynyrd Skynyrd and Erik Menteer lends quaint harmonies while switching between keys and guitar –  giving Blitzen Trapper its more experimental side.  Concluding with the more psychedelic “Sleepytime in the Western World” from 2008’s Furr, the band displayed their pop prowess throughout their hour, soon to be followed by a three song encore.   While Dawes has a more defined audience, Blitzen Trapper attracts both a younger crowd, along with the older alt-country scene, while they radiating their ramshackle PBR vibe with talent, aside from beards and flannels.  As they concluded with Led Zeppelin’s “Good Times, Bad Times,” it was clear what part of the song reflected this cozy double billing at the Crescent Ballroom. 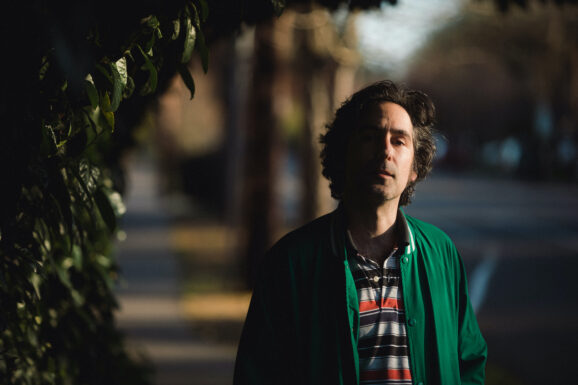