Squeeze – Glenn Tilbrook Tells Some, Not All

“They do it on camber sands.  They do it at Waikiki.  Lazing about the beach all day, at nights the crickets creepy.”

It was 1980 when this song, “Pulling Mussels (From The Shell)” was released on the album, Argybargy, from an under-the-radar British band by the name of Squeeze. The song hit the shores of the U.S. with some notoriety, yet the CD made only a mild dent in the states — pretty hard to believe from what appeared to be a very dedicated fan base running rampant on college campuses.  I, for one, was one of them.

Songs such as “If I Didn’t Love You”, “Another Nail In My Heart”, and “Separate Beds” gripped the post-punk world…especially in the UK where lead singers, Glenn Tilbrook and Chris Difford were frequently looked upon as the Lennon-McCartney of their generation; albeit, a much lesser paid version.

Squeeze came to prominence in the UK during the new wave era of the late ‘70’s/early ‘80’s. Their self-titled debut album in 1978 produced two hit singles, “Take Me I’m Yours” and “Bang Bang”.  The band’s second album, Cool for Cats in 1979 contained their highest charting UK singles, “Cool for Cats” and “Up the Junction”. The group performed under several names, most frequently “Captain Trundlow’s Sky Company” before penning their name from an American rock band as Tilbrook recalls, “The Velvet Underground had a really bad album out at the time [1973] when they were without Lou Reed or John Cale and it was called ‘Squeeze’.  We thought it would be funny to name it after that.”  The name stuck, although several band members did not.

“We definitely went through so many lineup changes.  I think we suffered a lot as a result of it”, Tilbrook explains. “I’m pretty convinced that the lineup we have now stands shoulder to shoulder with any of the better lineups we may have had in the past.  We’re back to a core now that is really good.”

And they definitely are back, touring the U.S. and having just played Coachella for the very first time.  When I asked Tilbrook if they broke out new material for Indio, he was pretty definitive, “No, actually not…we have some new songs, but I’m not playing them to anyone until we’re in the studio and we’re ready to record.” Spontaneity is their strong suit, which he learned early on in the process. “When we record we have to come up with ideas that day and we’re good at that.  That was the early Squeeze method and we’re back to it. That way, the sound is a product of everyone playing together and we sound great, so I don’t want to mess about with it.”

That sized up the answer to the following question which was ‘why did you pick a live show as your next CD release?’  Their latest, Live at the Fillmore (Anchor and Hope Music) dropped on limited edition white vinyl on April 14th.  Fast forward to why Squeeze picked this particular show in August 2010 and Tilbrook boils it down, “It’s one of those things…like trying to catch lightening.  There are many good live shows where spots of it are great, but the night we had in The Fillmore, the band just sparked all night. The double album set captures the whole show in its exact sequence and it sounds really alive and feisty.  I’m very proud of it.”

Fans will get their fix with hits such as “Tempted”, “Goodbye Girl”, “Hourglass” and “Black Coffee in Bed”.  Part of the success is the presentation – pressed on two vinyl platters, boosting the collectable factor for aficionados, and noted engineer Bob Clearmountain (Springsteen, The Stones, Bon Jovi) mixed the set.

Thirty plus years later, something’s gotta give, but it’s not Tilbrook’s voice. His most recent lament involves a digit as he explains, “Right now I’m facing the most challenging thing I’ve ever dealt with, which is that there’s something wrong with my thumb.  I used to bend it around the top of the neck of the guitar and I can’t do that at all.  I’m looking to having surgery because it’s a pretty big impediment.”  The word arthritis comes to mind of which he retorts, “That’s what I was initially diagnosed with, but the latest doctor feels it’s ‘trigger thumb’ – where when you use something a lot it seizes up on you.”

And three decades later there are other Tilbrooks running around — a brood of boys (ages 5,9, 19 and 21) all musically inclined as he describes, “They’ve all got ears…I know that. I step out of their way because they’re doing their own thing.”  His eldest son is touring in a band (“Millions”) in Australia and the second eldest is in a band (“Toucans”) in the UK. When asked if they come to him for inspiration, he responded dryly, “My second youngest son was playing guitar for me the other day and I said, ‘You know, Liam those two notes don’t fit together’ and he said, ‘You just don’t recognize it but the other kids will hear it just fine

From his stellar performance at Roseland Ballroom in NYC on April 28th, there is no doubt he knows his notes. Squeeze rocked with fellow old-schoolers The English Beat — and if not for a few more facial lines and whatnot, we all had a déjà vu moment in the ‘80’s.  In an animated set, legendary ska-man, Dave Wakeling pulled off some classic oldies from his General Public and Beat days with hits such as "Tenderness",  "I Confess", "Save It For Later" and "Mirror in the Bathroom".  Needless to say, The Beat didn’t miss a beat and warmed up the crowd for part two.

After a brief intermission, Squeeze opened up to what appeared to be an ever-growing sea of old new-wavers swaying, jumping, body banging to "Take Me I’m Yours".  The two leads have not faded away…if anything they’re more alive and vibrant than ever. Tilbrook’s youthful resonant sound mixed with Difford’s famous uber-alto voice still makes Squeeze so undeniably Squeeze.  And equally responsible are bandmates Stephen Large (keyboards), John Bentley (bass) and Simon Hanson (drums). The setlist highlights included a revamped version of  “In Quintessence”, “Tempted” in acapella with the audience, and Tilbrook’s riveting guitar licks paired with Difford’s vocal synthesizing on “If I Didn’t Love You”.  The lights came up for a sing-along version of “Annie Get Your Gun” and they aptly said goodnight with “Black Coffee In Bed”.

Squeeze will continue touring the states through the summer with the B-52’s and on to the UK in the fall.  At the moment, Tilbrook and Difford are working on new songs, which they will record in Tilbrook’s studio.  When I asked what that might be, he was quite stealthy in his response, “We’re going to be recording in May and then October.  It’s going to be something exciting and different for all of us and it will reflect the lineup that we have now and the fact that we have an exciting band”.  And that, they do.

Joanne Schenker lives in New York and is a contributing writer for Glide, LI Pulse Magazine and writes about music and the arts for other websites.  She can be reached at [email protected] 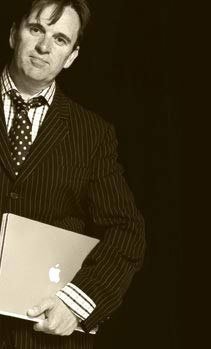