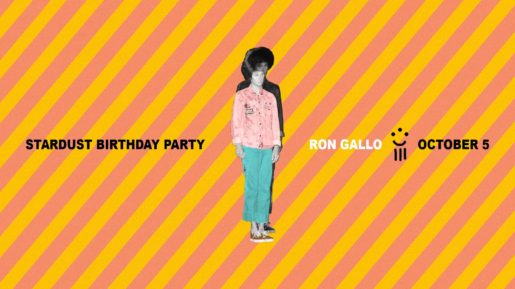 Philly-raised artist Ron Gallo will release his sophomore album, Stardust Birthday Party, on October 5th via New West. Today he shares the debut track from the album, his philosophical panacea, “It’s All Gonna Be OK.” “The beauty of Gallo lies in his ability to convey fun as the world’s on fire, to scream bloody mercy when everyone’s smiling,” said Noisey. “It’s not contrarian, it’s a deeper grasp of truth. ‘It’s All Gonna Be OK’ may seem like an oversimplification, but Ron Gallo seems to have this shit figured out.”Stardust Birthday Party is available for pre-order today. The album will be released digitally on CD and vinyl.

Stardust Birthday Party is the follow up to Ron Gallo’s debut album, Heavy Meta, a “garage rock album whose emphasis on lurid fun doesn’t sacrifice depth,” said The Guardian, giving it four stars. Mojo called it a “Shrieky-voiced, Jad fair-esque solo set of mid-70s Bowery oddball punk.” It was Gallo at his angriest, most disillusioned self. Amidst the typical political and social chaos in America and going through a break-up with a partner who suffered from addiction and mental illness, Gallo funneled his frustrations in to this frenetic debut.

A life-altering, seismic shift in Gallo’s life is what led to Stardust Birthday Party – a counterpoint to Heavy Meta and a spiritual 180.The girl he’d been seeing had taken herself to South America at the height of her addiction, found a healer and had miraculously come out on the other side in 2016. It got Gallo’s interest piqued in an inward path and he began reading, searching. On a whim in early 2018, he booked a trip to California for a silent meditation retreat. Despite his initial discomfort, something significant occurred on day two that served as a singular answer to all his existential searching, and reaffirmed the foundation of this record – inner-transformation and how that impacts the outside world and your perception of it.

Stardust Birthday Party follows Ron Gallo’s journey through awakening via self-deconstruction, kicking off with the simple prompt – “Who Are You? (Point to it!)” The album examines the tent poles of self loathing, anxiety and distraction on songs like “Always Elsewhere,” “Party Tumor” and “Do You Love Your Company?” ultimately leading to the answer on “‘You’ Are The Problem.” The second half of the album embodies the subtle slow shift into a more light, loving and compassionate outlook. Gallo pays tribute to John Coltrane’s own spiritual awakening on “Love Supreme (Work Together!)” named after the jazz artist’s seminal album. The record closes with “Happy Deathday,” a palette cleanser that challenges you to forget everything you’ve known. Throughout Stardust Birthday Party you’ll find that Gallo’s signature weirdo punk-poet persona is in full tact despite the absence of anger. The guitars are fuzzy and loud and there’s an urgency balanced with his new found OM.

Ron Gallo will be out on tour in support of Stardust Birthday Party throughout the rest of the year. A festival mainstay – having performed at Coachella, Bonnaroo, Lollapalooza, Hang Out, Firefly and sharing stages with White Reaper, Twin Peaks, Ty Segall, The Black Angels and more – he’ll appear this summer at Osheaga in Montreal, Pukkelpop in Belgium and Lincoln Calling stateside. In addition to these festival appearances, he’ll play dates throughout the US and Europe this Summer and will head out on a full North American tour this fall. Highlights includeGallo’s Hometown of Philly at the First Unitarian Church on November 10th, Music Hall of Williamsburg in Brooklyn on November 12th and the final date at The Basement East in Nashville, TN on November 17th. Tickets for the November tour go on sale August 10th.