Grateful Dead: Truckin’ Up To Buffalo

We examine archival Grateful Dead releases as we would those of storied-career jazz musicians, which is not to say we necessarily make stylistic comparisons. Bur rather, we view them first at a distance, as history lessons, and reach into the annals in order to review the facts of the era, what we know about the band–its styles and changes and habits and lineup foibles–and any extraneous circumstances of the performance.

The latest release, both on CD and a brilliantly executed DVD edition (the latter wholly recommended in order to, as with The Closing of Winterland, get the full effect), brings us back to Independence Day 1989, just outside Buffalo, NY. Riding the wave of commercial success following In the Dark (1987) on into stadiums, the Grateful Dead still couldn’t contain everyone who wanted to be on the bus. There are of course gems in every year of the Grateful Dead’s last third (1985-1995), but when asked to find a period of prowess in that time frame, the year 1989, and specifically the summer tour, of which this July 4th Buffalo date is a true nugget.

If there’s a quality catalyst in this period, apart from the general health, cohesiveness and good cheer that’s visibly evident in the band, it’s Brent Mydland. His beatific and tortured expressions juice up his playing, he is rarely, if ever, anything less than completely absorbed and the ease and fluidity of Jerry Garcia and Mydland’s musical conversation creates an undeniable comfort zone. Whereas, say, Keith Godchaux’s keyboard work degenerated over time into plodding fills and the widely discussed habit of parroting Garcia’s leads, Mydland’s playing evolved over his 10 years. By 1989, Mydland had found the exact balance of lead, harmony, counterpoint and foil to make himself a galvanizing force when he needed to be and not merely an accompanist or colorist. Watching Brent and Jerry interact on the DVD is giddy confirmation that Brent had a great thing going, and also an ominous reminder that he would be gone a year later.

The first set gets off to a sloppy goodness start, with a busting-out “Bertha.” Following “Greatest,” the tone of the set becomes folk-blues and the colors smoke and sepia: deep, communal roots in a rich “Cold Rain and Snow,” and incendiary guitar fireworks and skull-burrowing minor chords in “Walkin’ Blues.”

A hearty, if overlong “Row Jimmy,” and an expert “Masterpiece” whose poignancy is tough to ignore, with Bob Weir and Garcia tilting their heads and letting it all out there in tandem follows.

“Stagger Lee” is an oasis of sorts: a more relaxed pace, syrupy guitar, barroom piano and assured singing from Garcia. He isn’t stretching his vocals, but letting the song come to him, letting it breathe while the rest of the band stays mostly out of his way and keeps things rather straight and minimalist. If you didn’t know better, you might think the tune, heard on its own, was excerpted from a Jerry Garcia Band performance, based on its candor and unhurried pace, a come-down from the “Bertha > Greatest” opening and the more fiery blues transgressions from earlier. Interestingly, the swinging “Deal,” two songs later, feels laborious and a little clunky–curious because the song was a JGB staple–although its blazing solos and sprightly tempo pick things up again after the soggy (literally, for it indeed starts to rain in the stadium), unremarkable “Looks Like Rain” before it.

Here, at the end of the first set, the band seems to have lost a bit of momentum and scattered glances around suggest they know it. The “back to base” deal-maker to pick up Set 2 is a blazing “Touch of Grey” to open: propulsive, energetic, bouncy, rollicking. Garcia pumps his fist in triumph as he sings “We will survive!” and it is spine-tingling, hard-charging and ridiculously good fun. “Touch of Grey” drops into “Man Smart, Woman Smarter,” which adds to the fun, even if, after such a top shelf “Touch,” it seems a bit superfluous.

The table is set for an epic Set 2, and it’s also here where the DVD version diverges from the CD and establishes its necessity, all on the basis of how important visuals are to enhancing the viewer’s connection. Nowhere is this more evident than on an all-time worthy “Ship of Fools,” in which knowing what we know about Jerry becomes truly evident. His health and his trajectory at this point, his mournful croon and a rather pained expression on his face, while closing his eyes for lines like ” Now I cannot share our laughter” and “The bottles stand as empty, as they were filled before,” all add a level of depth missing from the audio alone.

“Ship” gives way to an adequate “Playin'” reprise (“continued,” as the liner notes identify, from the 7/2 Foxboro, MA version) that takes a little too long to settle in and then doesn’t really hang around. “Terrapin” does its job, with Mydland adding swirly effects, and the jam melts into “Drums > Space,” whose best attribute is that it moves steadily along. The DVD highlights the psychedelic visual effects craziness going on behind the drummers, but hardly dwells there, and it’s the only moment where the video stalls and fails to keep things forward moving and appropriately varied in its choice of angles.

The home stretch kicks in, a majestic four-song suite, poignant and ferocious and sometimes both, and starting with one of Mydland’s best tunes, “I Will Take You Home.” It’s a soulful bit, and Brent is front and center, accompanying himself with sparkling piano and touches of brass-replicating keyboard effect, his vocal phrases a melange of Little Milton blues-soul, Bob Seger howl and an agreeable touch of Journey cheese (and that’s meant as a wholehearted compliment). It’s such a sweetly rendered, 80s-style ballad that the band wrings extra drama out of the abrupt segue into “All Along the Watchtower,” as apocalyptic and menacing as any other rendition from this period.

Here, in “Watchtower,” the Grateful Dead are rocking out. Though Weir’s vocal quirks tend to overpower tunes that aren’t his own (especially Dylan songs), here he guts the thing: drawl-y, full-gravitas phrases, as the rhythm section picks up speed behind him and Garcia and Mydland prepare their assault. Mydland’s weapon of choice is fierce, sheety organ, and Garcia matches him with a trilly, Allman Brothers-style buildup.

The bottom of “Watchtower” drops out and we’re in the opening chords of “Morning Dew,” which climbs to its expected, emotional climax and another stratospheric Garcia solo. The closing “Not Fade Away” feels almost like an afterthought after that kind of sublime heaviness, but Phil Lesh’s bass drives taut tension-and-release between the verses, and the middle opens up to a funky organ-versus-guitar duel. The inevitable ” U.S. Blues” encore takes things home, and the beat goes on.

II: Touch of Grey > Man Smart Woman Smarter, Ship of Fools > Playin’ in the Band reprise > Terrapin Station > Drums > Space > I Will Take You Home > All Along the Watchtower > Morning Dew > Not Fade Away 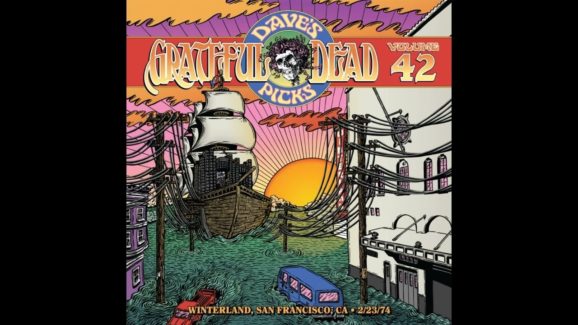