JJ Grey & Mofro’s appearance at Higher Ground was a reminder of what a rare pleasure well-performed live music can be.  And it’s all the more so pleasurable when that performance takes place in front of an audience present for the music above all else. The larger of the two rooms at the South Burlington venue held roughly two hundred people by the time The Eric Krasno Band finished, but given the acclamation afforded the openers (who proffered a well-intentioned but decidedly work-in-progress set), they were all there for the music.

And JJ Grey met them on common ground, taking no time to warm-up, but rather instantly began grinding away with ferocity at his electric guitar for “Standing on the Edge.” “Woman” fell more deeply in the soul style he’s cultivated with Mofro since 2008’s Orange Blossoms (the title song of which appeared, smartly placed, toward the homestretch of the two hour show) and “Country Ghetto” began the slow but sure unfolding of the various resources at Grey’s command. Besides his facility with guitar and harp, there’s his singing with a religious fervor, and beyond that, the versatility of the band behind him (the demonstration of which brought more than one gleeful smile to the face of impish bassist Todd Smallie, once a stalwart of The Derek Trucks Band).

The bandleader gave appropriate accolades to the musicians more than once, not just in direct introductions, but in a genuinely humble and often salty tone that bespoke genuine admiration for their technical skill as much as their savvy. No doubt well-wrought original compositions such as “Tame A Wild One,” off the just-release album This River, can stand on their own, but a careful arrangement executed flawlessly is enough to whet the appetite for much more of the same.

Yet even apart from the swagger with which he commanded the stage throughout the night, JJ Grey knows enough about stage dynamics to mix up the material in such a way he’s not repeating himself, but is nevertheless still preserving the overall style in common between the tunes. So, “Your Lady Is Shady” allowed the horns of saxophonist Art Edmiston and trumpeter Dennis Marion to shine, on their own solos and within the charts, while ‘Ho Cake,” an ode to Southern style comestibles, simply reversed the emphasis to the ensemble and the song, with the desired effect. Mofro is a band that can think on its feet.

Offering the subdued introspection of the new album’s title song as the initial encore was as much a sign of courage as dynamics: performed largely by Grey himself, till the group entered quietly near its finish, it made the final number of the night, “On Fire,” sound even more raucous. Introducing Krasno as a master on guitar did no disservice to Andrew Trube, who’d showed himself to be as restrained as he is intelligent throughout the evening, and the charter member of Soulive was outshone anyway by drummer Anthony Cole, who’d proved he deserved his spot at center stage all night for the way he provided center of gravity for all of Mofro.

When the seven musicians lined up for a bow just before walking off stage, there was the definite sense they had enjoyed themselves as much as the audience this full-moon lit night, no one perhaps more so than JJ Grey himself. 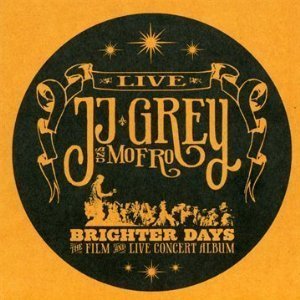