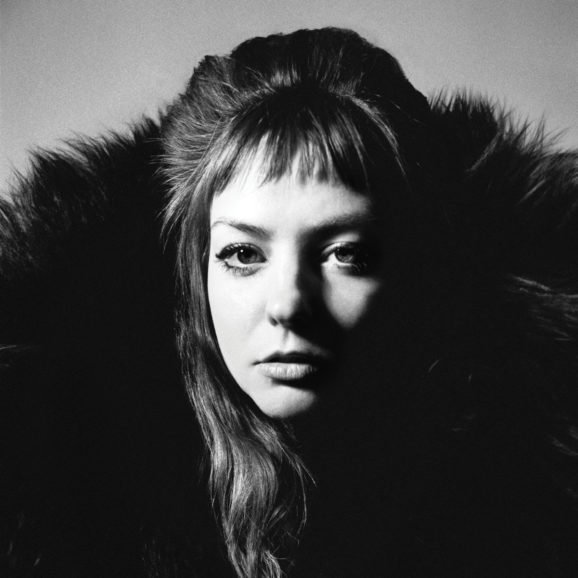 All Mirrors, Angel Olsen’s fourth full-length album, out now on Jagjaguwar, belongs in the canon of essential break-up albums, but more Exile in Guyville than Rumours or Blue. It wasn’t so much her own heartache that Olsen studied and mined for the album, but the act of facing herself and the self-acceptance and forgiveness she discovered during the inspection and reconstruction.

Olsen, a stylistic chameleon, seems to continually re-evaluate the best way to package her stellar songwriting abilities. Following her 2012 singer-songwriter debut Half Way Home, the 2014 alt-country tinged indie rock album Burn Your Fire For No Witness, and 2016’s retro girl-group and synth flirtation, My Woman, she fearlessly rolled the dice on something new yet again.

For All Mirrors, she actually changed it up twice: one, a stripped down acoustic album in the style of Half Way Home and her debut EP Strange Cacti; the other, a muscular orchestral version with a 12-piece string section and synth flourishes. Initially intending to release both versions simultaneously, Olsen changed her mind after recording both iterations, opting to release the string version first. She brought in new-music composer Ben Babbitt to collaborate on synths and string arrangements as well as Jherek Bischoff to create orchestral compositions for a few tracks, and teamed up again with producer John Congleton following their collaboration on Olsen’s sophomore album Burn Your Fire For No Witness, and the resulting instrumentation is impressively cohesive and resoundingly huge.

Bischoff handled the string arrangements for lead single and opening track “Lark,” which kicks off the album with a vivid sense of the break-up and its cathartic aftermath, an immediate gut-punch that depicts the awakening of Olsen’s rage and the reclamation of her power. The orchestral arrangement is integral to the song’s emotional expression, deploying racing strings to increasingly bottle the tension and allowing the rage to build as the song crests each stanza, less verse-chorus-verse than sequential movements, finally exploding five minutes into the track with Olsen’s searing indictment “What about my dreams?”

The song’s visuals capture the feeling of escaping a claustrophobic relationship, glancing across grief and rage and finally landing on the relief of freedom as Olsen goes out for some air following an argument, wanders all night, sees the sun rise, sleeps in wild grasses, and awakens to join a rapturous moonlit bonfire in progress. The music video culminates in romping on the beach with wild horses, in case you wondered whether or not Olsen was enjoying her newfound freedom.

Following “Lark,” title track “All Mirrors” delivers the album’s most satisfying song, blending blistering strings with eerie and dramatic synths that at times feel as thought they could be chronicling a Reagan-era heartbreak. The epic single, accompanied by a high-drama black and white music video, sees tension building and unraveling, cascading away in torrents for what amounts to a dramatic personal evaluation, staring into one’s own depths and calmly accepting as inevitable the jaw-dropping distance between various versions of the self.

Olsen, no longer accommodating manipulative, emotionally draining people and newly without “empathy, trust, love for destructive people,” as she said in a statement announcing the album, sprinkles this realization throughout All Mirrors, like on “Endgame” when she says, “I needed more needed more than love from you / I needed more needed you to be with me” and “I walk away from all the noise and I’m on my own / I don’t know how to speak with you, I’d rather be alone.”

The sentiment is distilled into its purest form on “Tonight”:

All the words that I hear

And it’s not because I don’t love

Just don’t have time to explain

All the things you think you’ve come to understand

Olsen closes the album on a hopeful note with “Chance” as she sings “I’m leaving once again, making my own plans / I’m not looking for the answer / or anything that lasts / I just want to see some beauty, try and understand / If we got to know each other / How rare is that?” She seems intent on enjoying the moment and truly being present with someone and with herself: “It’s hard to say forever love, forever’s just so far / Why don’t you say you’re with me now with all of your heart.” Olsen hinted in a recent interview that she might move on to other pursuits after All Mirrors -starting a record label, launching a literary magazine, motherhood – and if it’s true that we don’t get to have Angel Olsen the shape-shifting performer forever, then at least we can be fully present with her right now.