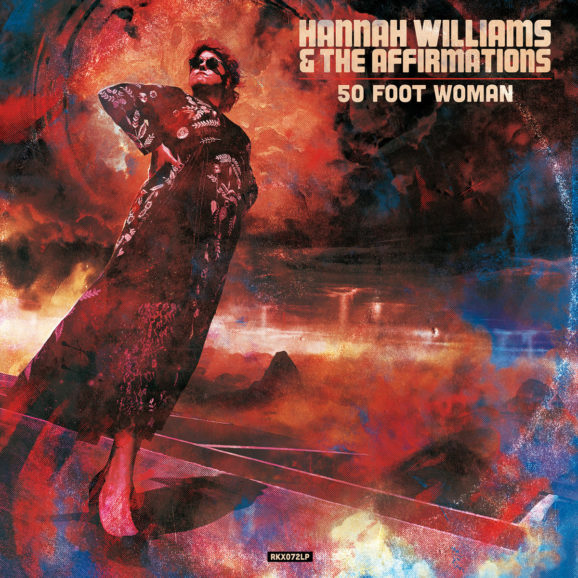 You don’t have to hear much of Hannah Williams to realize that she is a vocal powerhouse. Going back to her 2012 release A Hill of Feathers, that much was evident. She followed that with Late Nights and Heartbreak, which is another good example of her vocal prowess. Jay Z noticed her and liked what he heard enough to sample “Late Nights and Heartache” in his song “4:44”. In other words, if you’ve ever listened to Hannah Williams and heard the power of her vocals, you’re not alone.

On the new album 50 Foot Woman, Williams continues to show that she can belt out soulful vocals with the best of them, while her band The Affirmations show that they can lay down some grooves solid enough to match the vocals.

“I Can’t Let It Slip Away” is an absolute pounder. The song kicks off with a groovy organ part and a bass line that you can feel in the pit of your stomach while the beat propels the song at a good tempo. Before you’re even a minute into the song, you get a taste of the backing vocals, which are as good as in any Ray Charles song. After the first chorus, you hear some irresistible blasts on the horns. Toward the end of the song, Williams belts out some high notes that make you realize why you started listening to the album in the first place.

One of the charms of Funkadelic was the guitar work, and this band tips the cap to Funkadelic in “Tablecloth”. The rhythm section is what drives this song because it will definitely get you moving. In the instrumental break the horns come in, and then you are greeted with some guitar work that is right out of the Eddie Hazel catalog – even if it’s not quite as long as Hazel’s solos.

The Affirmations prove to be the perfect compliment to the soulful vocals with horns, organ and infectious drum fills like we hear in “The Only Way Out Is Through”. They can get you moving with uptempo grooves like the title track and they can bring it down for slow burners like “Sinner”.

You could say that Williams is a throwback, and you wouldn’t be wrong. She gets a growl in her voice sometimes that is reminiscent of artists like Big Mama Thornton. The more you listen, the more you realize that she could sing an economics textbook and make it sound good. Actually, that would make for a pretty good YouTube video.