Ghost Light, one of the jam scene’s more exciting and unique rock units, brought their improvisational live show to the Teragram Ballroom in Los Angeles on November 23rd. This five-piece has infused their live presentation with skilled musicianship, compelling creativity and tight arrangements.

Composed of Tom Hamilton, Holly Bowling, Raina Mullen, Scotty Zwang and new member Dan Africano – Ghost Light has reached glorious synchronicity that has made their recent live shows a revelation. Hamilton, on lead guitar and vocals, acts as the quarterback, directing the other band members with head nods and eye contact that triggers song segues, transitions and solos. 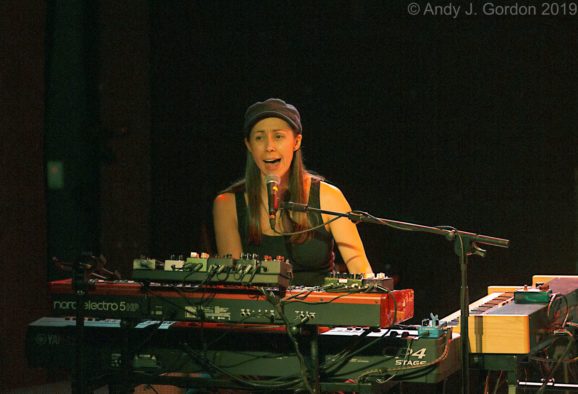 The setlist they had on stage was merely a guide as the band flowed fluidly into and out of songs, engaging in lengthy jams and often returning to a song they had left several minutes earlier. The band played a few of the tracks from their 2019 premier album Best Kept Secrets and a few of Hamilton’s American Babies covers; but they skipped their usual Grateful Dead and Bob Dylan classic covers. No one seemed disappointed as the original songs stood up on their own and the band’s confidence in them was apparent in their performance.

Mullen is another alum of American Babies, so when she and Hamilton shared vocals on that band’s “Winter War Games” and “Cold Blooded” in the first set, their cohesion stood out. The same happened with an American Babies medley in the second set that included “Fever Dreams,” “Swimming at Night,” “Joeline” and “What Does It Mean To Be.” Bowling’s virtuoso keyboard work filled the space with beautiful piano sequences and trippy organ explorations through the entire show. Her piano solo at the beginning of “Best Kept Secret” and amazing organ sequence during “What Does It Mean To Be” nearly stole the show. 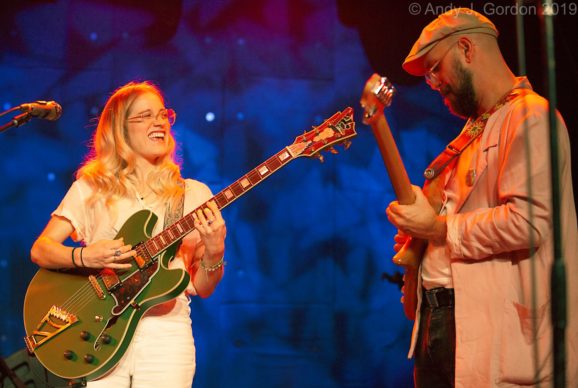 Mullen’s sweet vocals and rhythm guitar complemented Hamilton’s fantastic and varied guitar solos. Her vocals were particularly outstanding on “I Dare You,” one of the new songs. Zwang pounded out a steady beat on his drum kit and had a few moments of glory with rapid-fire, rhythmic playing. Bassist Africano, who also plays in John Brown’s Body and Elephant Wrecking Ball, stepped in admirably with a steady, booming beat. On a few occasions, Hamilton, Mullen, Bowling and Zwang did four-part harmonies that delighted the crowd.

Ghost Light will continue touring throughout the United States in 2020, including a few festival performances – they are certainly bound to continue their newfound musical journey onward.