On a blustery Portland, Oregon night with with the gorging of Thanksgiving creeping its head around the door, it felt like an appropriate time to savor a performance from one of heavy metal’s most legendary acts. King Diamond’s current tour is based around his upcoming album The Institute, which is expected to be out in 2020. Little details are known about the album other than that it’s his first studio album in twelve years, which in and of itself is a cause for celebration. On Tuesday, November 26th, the King provided clues as to what we might expect from the album when he stopped at Portland’s Arlene Schnitzer Concert Hall for what would be an epic performance.

At first glance, it seemed an odd choice to book King Diamond into an ornate seated theater, but it actually made sense considering the theatricality that would unfold on stage. Plus, King is living proof that it’s possible to be both classy and satanic at the same time. Indeed, when King was carted out in a wheelchair with an IV, he was a picture of gothic elegance in his signature top hat, long black jacket, and delightfully evil white and black face paint. The stage setup – a three-level cross between a house of horrors and an insane asylum with plenty of space for King and his creepy minions to carouse – seemed to reflect The Institution in a most gruesome fashion. Following a taped introduction of spooky noises, the band launched into “The Candle” with Diamond coming to life wielding his crucifix of bones as a microphone and unleashing his high-pitched sinister wail. Drummer Matt Thompson hammered away at the drums with machine gun precision while guitarists Andy LaRocque (easily one of the best axmen in metal) and Mike Wead flanked King on both sides with lightning fast riffing. “Behind These Walls” would find the singer howling demonically as he alternated his vocals between his wail and his menacing, ghoulish howl. During “Arrival”, a maddeningly glorious barrage of thrashy guitar would accompany King as he pulled a small child from a coffin labeled ‘Abigail’ and impaled it with a dagger. “A Mansion in the Darkness” would follow with harmonizing guitars exploding into riffs played at breakneck speed. 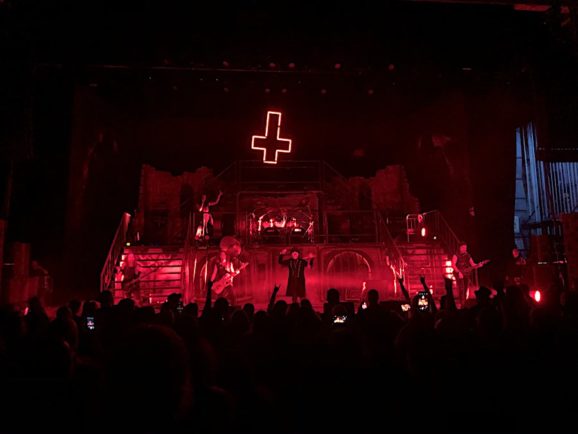 Musically, King Diamond falls somewhere between thrash, death and the New Wave of British Heavy Metal, or maybe the other way around as King influenced all of those with his own originality. In Portland, the music never got overshadowed by the theatrics, with the incredibly dynamic LaRocque staying strong with his impressive array of styles on songs like “Voodoo” and “Halloween”. There would be only one new song played – “Masquerade of Madness” – and the band executed it flawlessly with a catchy chorus and melodic, operatic arrangement that only raised excitement for the upcoming album. It was hard to ignore the entertainment value of songs like “Welcome Home”, which featured King wheeling around a senile ghoul, while “Sleepless Nights” mixed haunting acoustic balladry with thrash and featured some of the finest soloing of the show from LaRocque and Wead. They would up the ante during the final song of the show, honoring King Diamond and Mercyful Fate bassist Timi Hansen (who sadly succumbed to cancer in early November) with the sprawling “Black Horsemen” that featured both guitarists starting the song acoustically before morphing into an massive shredder.

In the setting of the Arlene Schnitzer Concert Hall, moshing was difficult if not close to impossible. This didn’t seem to bother the fans, most of whom were too focused and in awe of the multi-faceted performance taking place on stage to do anything other than raise the occasional devil horn. Throughout the performance, the band touched on nearly their entire discography. The career-spanning set did not come with an encore, but it did conclude with a well-deserved ovation and a bow from the band, who after more than three decades grinding away are still one of the most impressive metal acts out there.