Last year, BeachLife made a splash on the festival scene as a first-of-its-kind LA beachfront festival focused on celebrating live music that embraces SoCal’s unequivocal sand-between-your-toes lifestyle. This year, organizers have even more musical surprises in store including a headlining set from Steve Miller Band in their only Southern California appearance of 2020, as well as a collaborative appearance from Ziggy Marley and Stephen Marley who will be performing an extensive catalog of Bob Marley tunes in celebration of their father’s 75th birthday. BeachLife will be one of the only places fans will be able to catch this legendary performance which has anticipation for special guests.

Additional “only at BeachLife” experiences will include the weekend’s Yacht Rock Brunch starring Ambrosia and Friends. Grab your captain’s hat and get ready to set sail on some primo easy listening when Ambrosia welcomes special guests Stephen Bishop(“On and On”), John Ford Coley (“I’d Really Love to See you Tonight”), and Elliot Lurie(“Brandy You’re A Fine Girl”). Sugar Ray will also host a weekend brunch set against a backdrop of raised mimosas and palm trees. And don’t miss Southern California rockers Chevy Metal in their return to BeachLife when they tear up the stage with a full set of anthemic Queen covers.

At BeachLife, music sets the mood; but it’s ‘SideStage’, a 50-seat, sit-down restaurant on an extension of BeachLife’s headliners’ stage that steals the show. The Culinary Director for this year’s unprecedented upscale dining experience is chef and restaurateur David LeFevre (Manhattan Beach Post, Fishing With Dynamite, The Arthur J). LeFevre will guide a team of handpicked California-based chefs creating band-inspired menus served during mainstage sets. A full lineup of ‘SideStage’ chefs will be announced in February.

Beyond SideStage, BeachLife Festival will feature a wine village with boutique wineries, an extensive craft beer bar focused on LA breweries, a Moet Bubbles bar, Tito’s Backyard BBQ experience, and a wide selection of curated food vendors and trucks across the venue. Additionally, new at BeachLife this year will be a Speakeasy stage which will feature stripped-down acoustic sets from some surprising guests. A lineup of artists performing on the Speakeasy stage will be announced soon.

Three-day passes are on sale now on the BeachLife website. General admission passes are currently $299 and VIP passes are $749. The Captain’s Pass, which includes additional perks like backstage access, complimentary alcoholic beverages, and valet parking is $1,895. A percentage of ticket sales will be donated to several charities including Surfrider Foundation, Heal the Bay, Life Rolls On, Redondo Beach Police Foundation, Redondo Beach Education Foundation, and Walk With Sally. 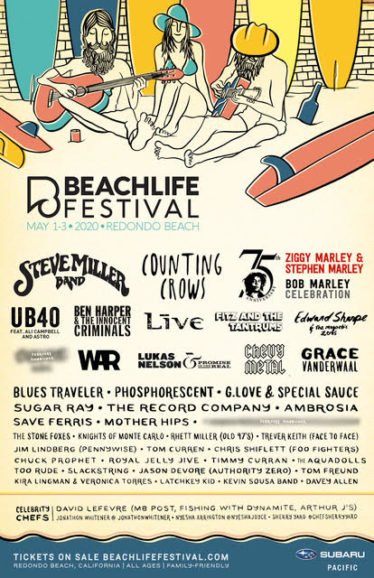