SONG PREMIERE: Craig Gerdes Delivers Acrobatic Guitars & Supercharged Blues On “Between the Cradle and the Grave” 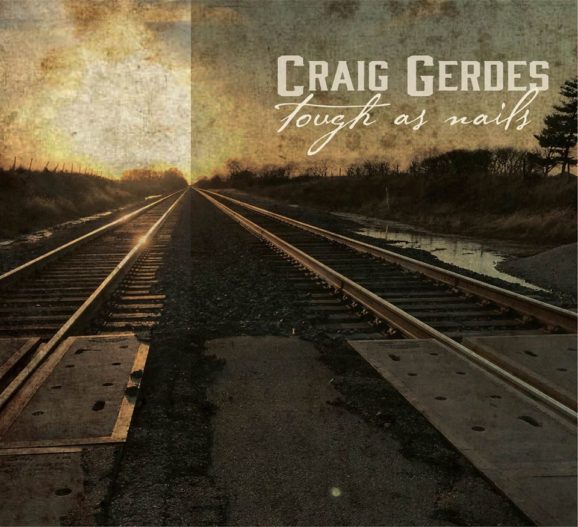 Steeped in the white lines, black tar and diesel smoke of the American highway, Tough As Nails—the latest LP from  Craig Gerdes—is raw and real, a document of a road-tested band fast on the rise. Ever since the central-Illinois songwriter released his lauded 2018 debut LP, Smokin’ Drinkin’ & Gamblin’, he’s been on tour almost constantly, playing upwards of 150 shows per year, including opening slots and festival support for top country and Americana artists from Tyler Childers and Paul Cauthen to Jamey Johnson and Cody Jinks, as well as a lengthy run with hard-rocker-turned-country-star Aaron Lewis.

“There’s definitely a lot of the road in this record,” says Gerdes, who travels with his band and his wife Janel in the van. “I love moving—that part of traveling where you’re actually rolling down the highway. It’s when we feel most at home. Things are just different—your sleep patterns and your mindset change. But the thing I love the most about being on the road is meeting different forms and facets of people—talking with them and hearing their stories about where they come from and what they do. I find that intriguing. So there’s a lot of that in this record, too. The title track and the album, when you boil ‘em down—that’s what it’s about. We wanted to speak to the people.”

For Tough As Nails, Gerdes and his road band—lead guitarist Jake Baxter, bassist Britton Wood and drummer Randy Noy—hit St. Louis’ Native Sound Studio revved up and ready to go, with producer/engineer David Beeman at the helm. Beeman had also worked with Gerdes on 2019 single “Tailgate n’ Tallboys,” a theme song commissioned by the festival of the same name, a six-day, 30+ band country concert, held annually in Peoria, Ill. “Tough as Nails was the first time that I was able to be like, ‘Alright, boys, we’re pulling off the highway and going into the studio for a week,’” Gerdes says. “Capturing the energy of our live performances was crucial to me. So we just went in fresh off the road and banged out the meat and potatoes of it in three days.”

The resulting LP—spruced up by Robby “Man of Steel” Turner on steel guitar—reeks of spilled Jack Daniels, truckstops, pool halls and tobacco-stained green rooms. Its second track, a hi-octane, four-on-the-floor cover of Roger Alan Wade’s “If Guitars Were Guns,” acts as a manifesto for Tough As Nails, a record that packs more grit and wallop than most of its country contemporaries: “I play country music in my little cabin home in the hood, I play rock & roll because it makes me feel good / I play them ol’ blues to take a load off my mind, I play what I please, out of tune and out of time.”

As with any artist worth his salt, Gerdes’ sound has been evolving since the last record. Smokin’ Drinkin’ and Gamblin’—anchored by Nashville pedal-steel icon Jim Vest—was deeply indebted to the ’70s country on which Gerdes was raised. But with Tough as Nails, he and his band just “let it all go.” “We approached it like we would a live performance,” Gerdes says. “I didn’t put no reins on it or nothing like that. I just let it evolve into what it became. It’s a mixture of all my different influences. With country music, the way I see it, it’s a melting pot: rock & roll, Southern rock, rockabilly, the blues—it all goes in there.”

Glide is thrilled to premiere “Between the Cradle and the Grave”  a full-on hellbent rocker in the vein of Street Survivors era Skynyrd, with acrobatic guitars and supercharged blues. Gerdes stops short of nowhere on this track, incorporating a plethora of rock and country’s most militant attributes into an outlaw stunner.

“I wrote ‘Between the Cradle and the Grave’ about how short our time is here on Earth. It all goes back to a conversation I had with one of my Dad’s old childhood buddies in a bar over a game of pool,” says Gerdes. ” I always like hanging out with the older guys, listening to their stories. My dad’s friend had gotten sick and had to have surgery, and he overcame that, and he was finally able to get out, to get back to drinking beer and shooting pool. So we start a game, he breaks and starts just running the table on me. As he’s chalking up his cue, he says, ‘You know, Craig, it’s a beautiful life that we live. I love life, and you should, too.’ I agreed, and he said, ‘The only damn thing of it is, that road between the cradle and the grave, it ain’t long enough.’ I was in my early 20s at the time, but I just kinda kept that with me.”

“In the song, I touch on alcohol and drug abuse, being on the road, trying to make it in the music business without losing your soul—I’m out here paying my dues for the sake of the song, to get the music to the people, but at the same time, I’m burning down the road between the cradle and the grave. I’m basically burning up at both ends. And you ain’t guaranteed tomorrow.”