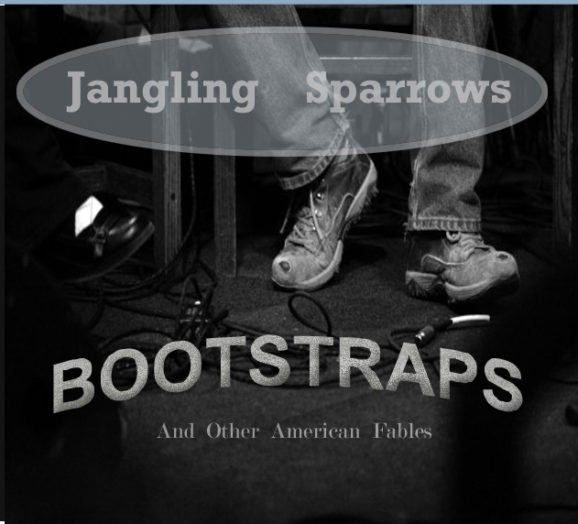 Jangling Sparrows is a trio from North Carolina whose lead singer Paul Edelman has shared the stage with stalwarts such as Drive-By Truckers and The Bottle Rockets. On the band’s new album, Bootstraps and Other American Fables, the band takes its place among those alt-country acts in showing its capacity for strong songs that tell a good story and rock hard. Of the new album, Edelman said, “Bootstraps and Other American Fables is a wall of sound rock and roll record designed to be your companion through trouble and triumph.” It seems fair to say that everyone could use something like that.

It doesn’t take long to hear some similarity between this and some other North Carolina bands. Vocally, Edelman shares some similarity to BJ Barham of American Aquarium. Melodically, the band blends gritty rock with country sounds much the way that The Backsliders did. The beat in the chorus of “Estuaries” sounds like something out of a punk song.

The band taps into a bit of a blues sound on “Carolyn”, with a bass line that is pure blues and a guitar riff sounds a lot like the guitar in “Killing Floor” by Howlin’ Wolf.

You don’t find too many songs – in any genre – about Civil War figures. Jangling Sparrows doubles down with two songs about figures from the Civil War. “Hey, Hey, Harriet Tubman” isn’t just a historical document of her life, but rather, like Steve Earle’s “Christmas in Washington”, this is an invocation of the spirit of someone whose spirit is sorely missed in our modern world. Particularly poignant is when Edelman sings, “People tend to listen when the quiet ones holler.” “Joshua Chamberlain” is a song inspired by a biography of Chamberlain, who was a general in the Civil War. In it, Edelman calls Chamberlain “savior of the Union” and wishes that Chamberlain would return because “our leaders are a joke.”

The band explores a familiar theme in “Label’s All Mine”, teling the story of a man who has “the county’s finest ‘shine” and wants to protect it from some interloper who tries to steal some. This song includes a swinging bass line that somehow meshes perfectly with the gruff vocals and the laugh that sounds like Muttley from Wacky Races.

This is an alt-country album with some forays into blues and ballads, like on “True Fine Now”. However, regardless of the particular style of a song, the thing that comes to the forefront is Edelman’s ability as a songwriter. He has a way with words and he knows how to tell a story. Not only that, but this album shows that he knows how to write songs that are ready-made for singing along in bars with people you’ve just met.