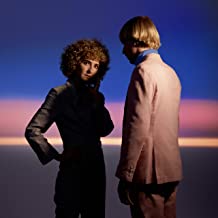 Tennis’ fifth full-length album, Swimmer, is an immersive collection of dreamy pop music that captures everything the duo does well, though it doesn’t stray from the formula started with 2011’s Cape Dory. Married duo Alaina Moore and Patrick Riley produced the album themselves, nine tracks of hummable melodies that were written during a four-month sailing trip. The songs carry a calming, carefree vibe appropriate for time at sea. Though, true to Tennis form, Swimmer is a warm and breezy record, it does deal with some painful relationship issues, portraying those issues through the lens of adversity strengthening the relationship.

The album-opening “I’ll Haunt You” has all of the Tennis trademarks – infectious grooves, piano-centric composition, intricate melodies, and Moore’s soft voice beautifully harmonizing with itself. Though the title may sound ominous, the exploration of Moore and Riley’s relationship is mostly optimistic. “As the sun slips over my shoulder, all my need is pulling me closer,” Moore sings over a slow two-note piano sequence. The song’s outro hints at a deeper connection and perhaps dependence. “I’m holding you so long I will haunt you when I’m gone,” Moore sings.

The staccato beats and thumping piano chords of “Need Your Love” make it a standout track. It is Swimmer’s angriest song, detailing a toxic relationship, though Moore’s soft, accessible voice defy any enraged tone. “Baby, you’ve got more poison than sugar,” Moore repeats at one point, her voice fading from energetic to a crawl. The song’s various tempo shifts mirror its thematic complexity, with the fast musical flow and vocal cadence of the pre-chorus grinding to a slow, trudging chorus.

Most of Swimmer is made of mid-tempo ballads, with the drums and keys anchoring the song while Riley’s guitar mostly appears as flourishes to flesh out the mix. Riley’s basslines in “Runner” and “How to Forgive” really pop, though, adding a bit more edge to the dreamy pop. Like previous albums, Swimmer has a retro feel, harkening back to 1970s AM radio hits, particularly Moore’s vocal phrasing and soft, angelic voice. The grooving bass and hectic drum rhythms, especially on “Need Your Love” and “Runner,” add a modern, catchy flair.

The album closes with “Matrimony II” a sequel to the song “Matrimony” from 2017’s Yours Conditionally. The song is a love letter from Moore to Riley, written for their ten-year anniversary. Moore recalls their wedding day and being so caught up in the moment that she doesn’t remember saying her vows. “I guess I blacked out but remembered to move my mouth,” she coos over piano chords, Riley’s bouncing bass, and a backing string section. Detailing the difficulty and rewards of committing to marriage, Moore sings of “the gentle pull of gravity that’s being unto-death.”

Swimmer doesn’t quite reach the peaks of other Tennis albums but is a solid album featuring expertly composed and performed piano pop. The duo’s ear for melody and juxtaposition of densely layered music with sparse instrumentation make Swimmer a rewarding introspective album that feels like a heartfelt walk through ten years of marriage and making music.