Part of his month-long US winter tour, Kamasi Washington played one night at Northampton’s Calvin Theater on February 22nd, with his eight-piece band, including drummers Tony Austin and Ronald Bruner Jr, Masayuki Hirano on keyboards and synthesizer, Ryan Portar on trombone, vocalist Patrice Quinn, Ben Williams on bass, and his dad Rickey Washington on flute/soprano sax.

Looking at the audience tonight, one was struck by the diversity of crowd age. Jazz concerts are not typically identified with the youth, yet here there were clear groups of teenagers, 20 somethings, and the more typical older group of jazz fans.

Seen as a crossover artist between jazz and hip hop, funk, and electronic music, Kamasi Washington moves effortlessly between the genres. In fact, it could be said that these genres are merely classifications that hold new real adherence in Washington’s work. His music expresses his reverence for the past but he plays with full acknowledgment of the present. 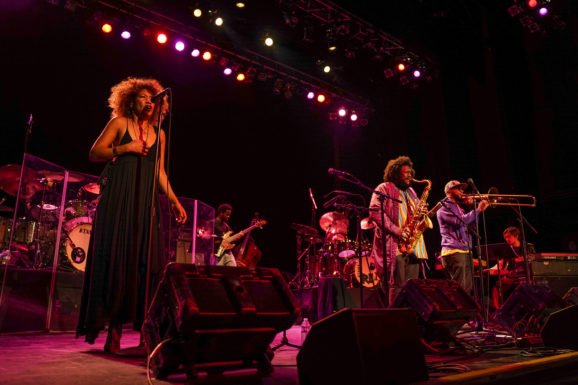 Having played with a host of jazz legends such as George Duke, Stanley Clarke (a key contributor to jazz fusion of the 1970s), and McCoy Tyner, the 39-year-old Washington comes with legitimate jazz heritage. While at college he played in Snoop Dogg’s horn section and learned it was all about the” vibe”. Washington had grown up listening to and playing both hip hop and jazz. However, Washington got a major break with recognition in his work with Kendrick Lamar on the intensely creative 2015 To Pimp a Butterfly. Shortly after, Washington released his first non-self released album Epic, which the Guardian newspaper named in its top 10 albums of the year. In 2017 Washington released more of his jazz fusion sound on Heaven and Earth, which contains his most well-known track to date “Street Fighter Mas”, which also happens to be an intriguing and highly watchable video, directed by AG Rojas.

In fact, playing “Street Fighter Mas” is how he opened the set. Most artists save their most recognized work towards the end. But Washington gets straight to it, no messing around, and by doing so, he freed the audience from an obvious theatricality and allowed us to pay even more attention to what followed. “Street Fight Mas”, inspired by video arcade games takes on a heavy 70s funk sound with early synthesizer sound and contains uplifting background vocals that could easily come from an Ennio Morricone movie, except here tonight the vocals came just from Patrice Quinn. Washington hit hard with his tenor sax, punctuating like a percussionist, and at other times he played seductive and cool. In all situations, he really puts every kind of emotion into his sound. 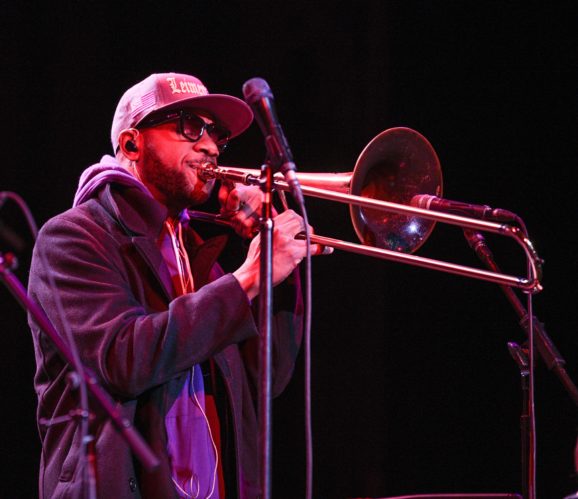 Halfway through the act, Washington introduces the man who taught him everything–his dad Rickey Washington, who has had an extensive career as a session musician, woodwind player, producer, and teacher. His flute playing just sounds right for that airy sound overlaying the unmistakable force of Wahington’s tenor sax, and the massive drum effect of the two drum sets. At times the drummers played a slightly offbeat sound that added texture, and just the right amount of difference to make it always interesting. This created a depth, and when combined with other instrumentation, resulting in a sound, rich, nuanced, and unexpected, not unlike the work of the mystical jazz composer and musician Sun Ra.

Washington in his soft-spoken voice pauses to address the audience. Turning towards keyboard player Masayuki Hirano, Washington asks for a C note, and then another, and another (insert humor). Then he asks for an A, B, C.. and an F sharp. As we hear the obvious difference, he captures succinctly the metaphor and states “We don’t need to be the same to love each other….We are all beautiful.”  It was simple and seemed to resonate audibly in the crowd. 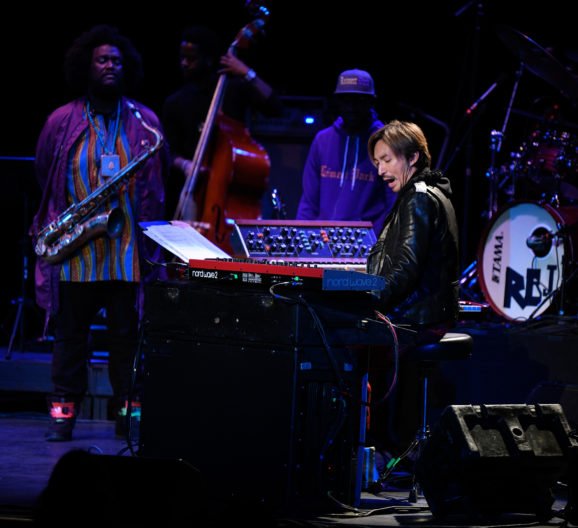 Finishing the set was another homage to popular culture “Fist of Fury” (1972 Bruce Lee movie of same name) also from the Heaven and Earth album. It commenced like a sci-fi space attack battle from the keyboards. The overall sound quickly declared a 70s Funkadelic jazz fusion vibe. As the piece progressed, however, an undercurrent of ska in drum and bass offered a lively and more buoyant rhythm to the set. Vocalist Patrice Quinn cooly delivered “And when I’m faced with unjust injury, then I change my hands to fist of fury”. Coincidentally or not, the Bruce Lee movie is all about retribution, race, and justice. And the refrain continues with “Our time as victims is over…”

Washington’s music taps into culture past and present. Many of his tunes exemplified how Washington can keep it both simple and sophisticated at times, appealing to a wide range of audience members, young and old. Certainly aware of societal struggles past and present, he absorbs his influences and finds direct and emotional expressions that do not conform to strict genre identity whether it is jazz, fusion, or hip hop. In the 21st century, cultural lines have blurred, and the conflation of past and present only seem to indicate what the future is. Kamasi Washington stands as a creative contributor and collaborator who seems to fear nothing in his magnificent quest to bring a sense of harmony from diversity.

As the author left the Calvin Theater immediately, he could hear a group of teenagers choralling the dreamy uplifting vocals that permeated so many of the tunes of the concert: making one thoroughly amused and yet uplifted, never experiencing this form of emulation from a jazz concert.