The third Innings Festival in Tempe held at the city’s Tempe Beach Park held over two days (February 29 and March 1st)  was a resounding success. Blending music and baseball’s spring training has been wildly accepted by Arizonans. The producers of Lollapalooza have a home run with this festival. The event had two stages dedicated to music performances and one stage dedicated to baseball demonstrations.

The weather was perfect in the 70-degree range for the weekend. The food was festival food with hotdogs, hamburgers, nachos, pizza and the like. Everything provided a great experience for the fans. Major league baseball legends like Kenny Lofton, Eric Davis, Wally Joyner, Jim Thome, and more were there to meet the passionate baseball fans and provide interviews and unique performances.  The music was the major draw for the weekend with a blend of jam, indie rock, folk, blues and country music. Glide was there to soak up the sun and catch the musical vibe. Here are some of our favorite moments. 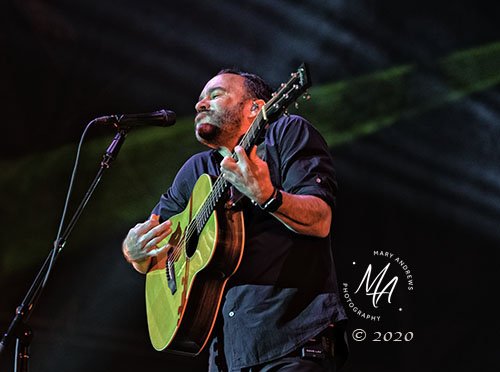 The Dave Matthews Band (DMB)was the headliner for the weekend and the band’s marathon set was at least two and a half hours of DMB bliss. A large percentage of the crowd seemed to be there strictly for DMB. The set started with a dark version of “Don’t Drink the Water.” Matthews greeted the fans, ”What a wonderful place to have a festival.” The band was off and running and Matthews seemed to be in rare form as he relished the love coming from the huge crowd. He played his best guitar and made faces as he posed for the fans and enjoyed himself. Jams included “Crush,” “You & Me,” “Grey Street,” and “Why I Am.” The band covered The Doobie Brothers’ “Long Train Runnin’” and Rufus’ “Tell Me Something Good.”

The band members had the freedom to deliver their epic, immense talent throughout the show. Guitar wizard, Tim Reynolds, trumpeter, Rashawn Ross, Jeff Coffin on saxophone, Carter Beauford on drums, Stefan Lessard on bass, and keyboardist, Buddy Strong (a Phoenix native) were mesmerizing throughout the set. 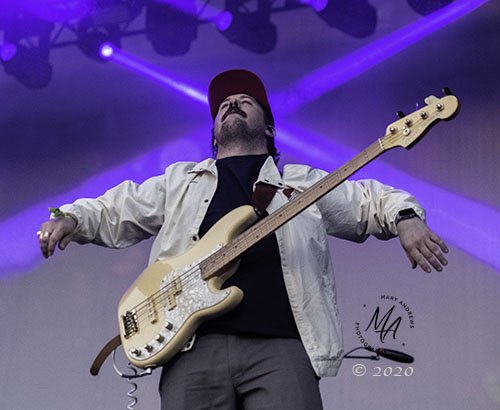 There were a couple of very pleasant surprises during the day. Portugal. The Man (PTM) was a major surprise. The band was wildly entertaining. Also, they were the only band to make any kind of a political statement when a native American guest spoke to fans before introducing the band.

Then the fun began with a video of a Beavis and Butthead as they weighed-in on the PTM single “Feel It Still.” Butthead proclaimed at the end, “Better than the Beatles, better than the Rolling Stones, even better than Silverchair; ladies and gentlemen bow down to the greatest band in the world.” 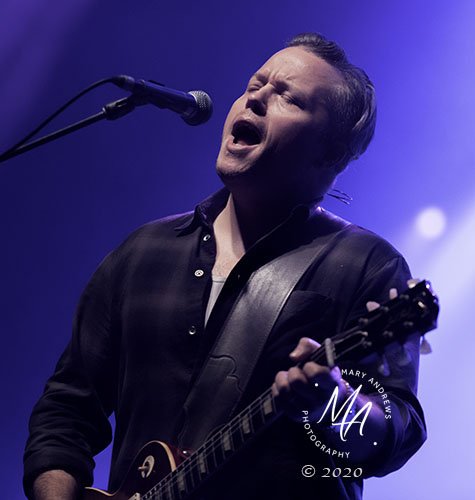 The powerful singer/songwriter, Jason Isbell, is always a favorite live performer at festivals. His deeply personal song lyrics are always able to reach into the human soul. He fronts his band, The 400 Unit that is also filled with very powerful musicians. Isbell shreds with the best.  The set included staples “24 Frames,” “If We Were Vampires,” “Something More Than Free,” “Hope the High Road” and “Super 8.” New songs from his upcoming album Reunions included “Be Afraid” and “Overseas.”

Southern Rock band, Whiskey Myers, gave a rock and blues set worthy of a Texas bar crowd. Lead singer Cody Cannon had the perfect swagger and vocal chops for the songs “Deep Down in the South,” “Bury My Bones,” and “Home.” 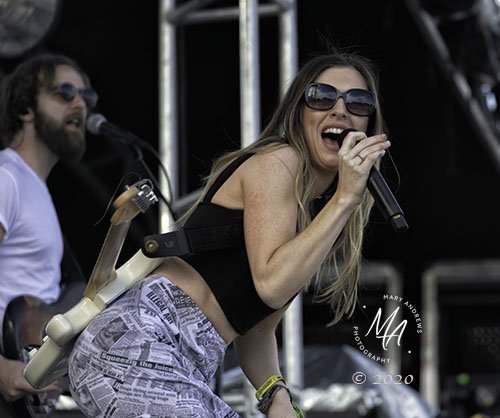 ZZ Ward had a false start to her set due to sound issues but she didn’t let that bring her set down. They returned to the stage to belt out a crowd-pleasing blues, rock set that included some songs that they had not performed live before.  She performed “Put the Gun Down,” “Charlie Ain’t Home” and “Lil Darlin’ ” from her first album. It is always a treat to experience Ward’s high-energy and blues influenced live performance. Her harmonica playing reveals an old soul in a young body.

Sunday’s highlights included a not so surprising raucous set from British rock and rollers, The Struts. The band burst on the stage like they were The Rolling Stones filled with attitude and glamour. Luke Spiller is the frontman who has the swagger to carry off one of the most fun shows of the day. Spiller has been described as “the musical love child of Freddie Mercury and Mick Jagger.” Spiller was raised on gospel music as a child.

“Primadonna Like Me” seemed to be a perfect set opener. By the time the glitter-faced singer got to “Body Talks,” the crowd was totally enraptured singing and swaying to the beat of the band. It was a breath of fresh air in the heat of the day. 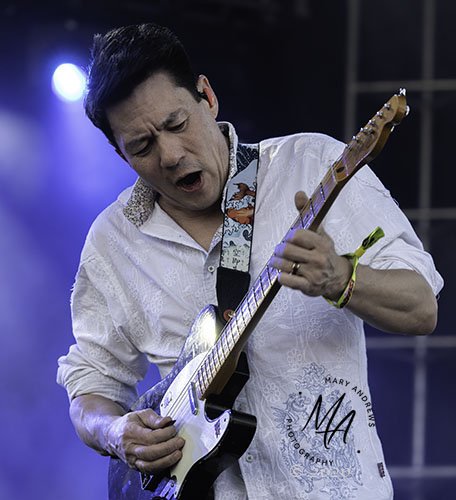 Big Head Todd and the Monsters gave a searing blues-driven set dripping with guitar-driven solos that pleased everyone. They started with the song, “Bittersweet” that got the fans in a blues mood. If that wasn’t enough, Todd Mohr introduced a special guest for the set, singer Hazel Miller. She joined Mohr for a medley of “It’s Alright” and Marvin Gaye’s “Let’s Get It On.” She also performed a gospel-flavored rendition of The Band’s “The Weight.”

Nikki Lane added the country flavor to Sunday’s festivities. The singer/songwriter had many songs about her lost loves like “Man Up,” “Highway Queen,” and “Send the Sun.” She has that perfect voice to sing those country songs and she’s not hard on the eyes either. Sadly, Death Cab For Cutie’s set was cut short after four songs due to lead singer Ben Gibbard’s illness. He stormed off stage as a result.

Weezer closed the Sunday concert as they got the 1000 p.m. crowd amped up after being out in the sun all day. With songs like “Say It Ain’t So’ and “Surf Wax America,” the band and the crowd let it rip for 90 minutes. They started the set with “Buddy Holly” and “Undone – the Sweater Song.”  Weezer also performed several cover songs including “Everybody Wants to Rule the World,” “Africa,” “Take on Me,” and “Lithium.” It was a set that took on some rock nostalgia and a perfect way to end the festival.