If you look behind the fringe on the mask that Orville Peck wears during his performance, one can see a smile and a twinkle in his eyes. Peck has a lot to smile about these days. The masked crooner who plays honky-tonk music and sings with a deep baritone voice has an air of mystery and it works well for him.

March 10th’s show at The Rialto Theatre wasn’t Peck’s first trip to Tucson. He revealed early in his set, “I love Tucson. I love to drive in Tucson. I spent the day at the Desert Museum. Because I’m a nature boy.” Of course, the crowd reacted with overwhelming applause and verbal raves. Peck had won them over as if he really had to do that. There multiple shouts of “I love you from the crowd. He always responded with, ”I love you too.” 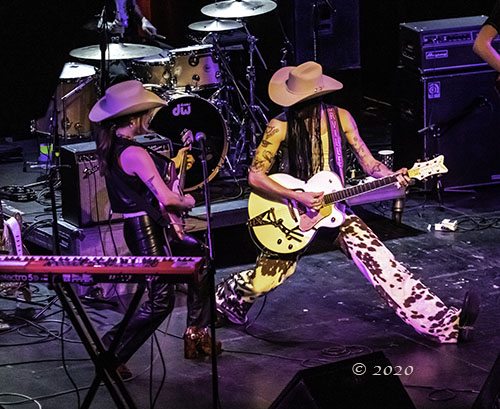 Peck may be too different to be appreciated by Nashville’s brand of country music, but it doesn’t matter because the sold-out house of multigenerational fans wanted to ‘breathe him in.’ This was Peck’s party filled with drag queens standing next to indie-folk rockers, standing next to frat boys and elderly couples who are die-hard ‘old country’ enthusiasts. Fans were dressed for the occasion with glittery faces, Peck-like cowboy hats, and high-topped boots. Peck’s attire was with the top half of his body scantily dressed while the below the waist, he had cowhide chaps donned over jeans. It is a unique composition of fans and they would not necessarily be in the same room together under normal circumstances; Peck makes it work.

Country music has never really had a star so shrouded in mystery. Rumors whirl around about Peck’s true identity. He has identified as being gay in interviews. He also confirms that he has been an actor and a professional dancer since childhood. He has had a life-long love of old country music. Reporters have claimed him to be Daniel Pitout a former drummer with the Canadian band, Nu Sensae. This is based on similar arm tattoos. Peck has neither confirmed nor denied the rumor. 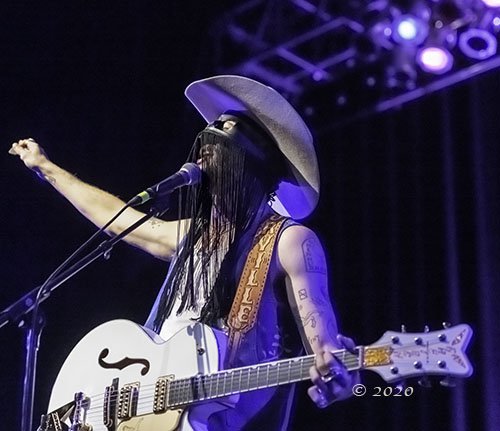 The show started with a raucous version of “Big Sky” that led into “Winds Change.” The bulk of the songs were from his 2019 album release, Pony. The songs are personal, self-penned compositions. Peck introduced the third song in the set, ”Queen of the Rodeo,” by saying “This next song is about a drag queen. Something else we need to protect. Have you ever been to drag shows? I bet you haven’t, I’m not judging you, but you better go. Doesn’t matter if you are gay, straight or in between, you gotta go to a drag show and support local art.” This is not typical of bro-country either.

The only cover song of the night was an energetic version of an Emmylou Harris/Gram Parsons’ song “Oh Las Vegas.” The greatest sing-along songs were “The Iron Hoof Call” and “Hope to Die.” Peck invited fans to sing and obediently they obliged loudly and joyfully. Peck has spoken about feeling alienated his entire life. He is ecstatic to feel that fans from different backgrounds come together and celebrate his songs in a very cathartic way for him. The fact is, he has opened the door for future country artists to do something different. Peck has really caught on and he seems to be having the time of his life.