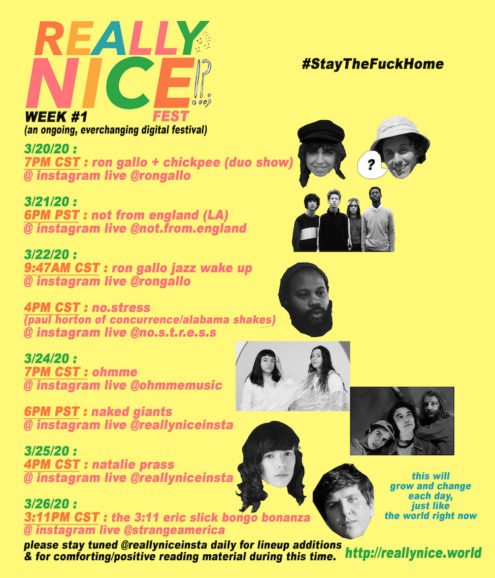 “The origin: Last week, I was scheduled to headline a festival in Columbus, OH called MELTED. I flew in my drummer from Philly and rehearsed for a week with an all-new band just for this one show – so when we found out it was cancelled 24 hours before due to Coronavirus, it gave me the idea that we should do a livestream show from my house for the whole world instead — to make up for our lost show but also to encourage people to STAY HOME. We scrambled to get the right gear and figure out the right platform and ended up doing two shows — one for the U.S and one for Europe (with a focus on Italy where my wife is from and her family currently is on lockdown) on Instagram live. The whole thing went incredibly well (surprisingly). It drew in thousands of people and a lot of donations via venmo/paypal. Plus, the people watching were really grateful, way more than normal.

The festival is my wanting to continue this idea and embrace the crazy change we are all going through right now. I get to stay busy by curating anything and everything daily with an instant platform and people everywhere get to be happy and entertained and forget this strange reality for a little bit while staying in the safest place they can be right now – home.

I’m making it all up as I go, but I want this to last for as long as we are indoors and eventually turn into a “real life” thing when that is possible. I am going to do a weekly poster with that week’s schedule. Much like the world right now, it’s going to change and grow daily. There will be musical performances, DJ sets, Q&A’s, tutorials, digital hangouts, talk shows from myself and other artists/friends all over the world. It’s crazy that I can wake up one morning and decide to do a cover set of 90’s one-hit wonders, or just play jazz and talk with people all over the world directly in my own home. This isolation is making things oddly more intimate. If REALLY NICE FEST can help artists involved make a few dollars while immobile and combat the heaviness everyone is feeling. Everybody wins.”

Ron Gallo’s latest album Stardust Birthday Party was released in 2018 to critical acclaim. Noisey stated, “The beauty of Gallo lies in his ability to convey fun as the world’s on fire, to scream bloody mercy when everyone’s smiling. It’s not contrarian, it’s a deeper grasp of truth.” He is currently working on the follow up to Stardust Birthday Party for release via New West Records.