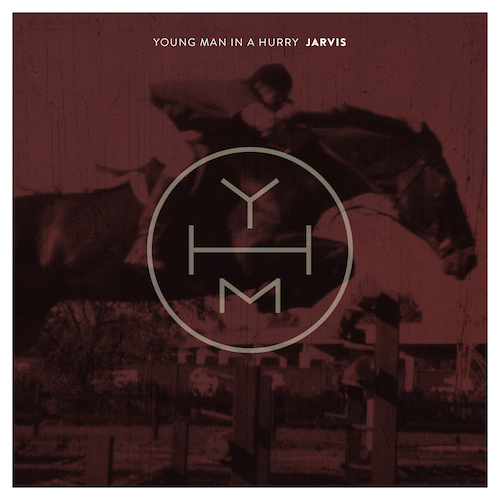 The world needs more thinking-man’s rock and roll. Luckily for us, Chicago’s Young Man In A Hurry have injected a strong dose of intellectual fervor into their cinematic indie rock on their debut album Jarvis. Born out of a friendship between songwriter and frontman Matt Baron and drummer Meyer Horn, the band champions a kind of deadpan rock delivery in a similar vein as acts like The National and David Berman. Where they differ is that the songs tend to be less brooding and more celebratory, but in a restrained way.

Named Jarvis after a friend that Baron knows in Chicago, who he describes as “the kindest person I’ve ever met,” the album’s nine songs dwell on themes of unconditional love, timelessness, and unfazed joy. The real life Jarvis, who is a classically cool Chicago character, is an “infinite symbol” of all of these things. Baron sings with a sense of mellow sincerity on the album’s opening track “Natural Love,” letting his straightforward, almost spoken word vocals drift over a punchy drum beat and jangly guitar. In this song and throughout the album, Baron comes across like a less shouty, less party-obsessed version of The Hold Steady’s Craig Finn, which is further heightened by the band’s group harmonies and the frequent presence of a piano. What makes the band’s sound so compelling is the way they can shift from more laid back and thoughtful fare to a heavier post-punk sound. We get the latter on songs like “Give Me Patience”, which contrasts a fast groove with Baron’s dreamy pop-inflected vocals, and “Many Things,” a clear standout with its left-of-the-dial, brainy rock sound that brings to mind college rock acts of the early 90s alongside contemporaries like Real Estate. In this song, the band even layers in wind instruments to create a psychedelic bridge before the infectious chorus and a splintering guitar solo.

As a songwriter and bandleader, Baron also shows a depth that comes through in more tender moments like the reflective “Wind to Blow,” which catches you off guard when its soft vocals morph into a fast chorus with a touch of orchestration and bending guitar work. One of the strongest elements of this album is also the way the band subtly inserts different instruments; on the major standout “Larkin” we hear a meandering saxophone that adds to the romantic yearning of the lyrics and vocals before the band fires off a wash of guitar soloing reminiscent of fellow Chicagoans Wilco. The album ultimately closes on a high with “Eau Claire,” one of the more experimental tracks on the album with its mix of spacey synth and grungy electric guitar.

Over the course of nine tracks, Baron often sings about seemingly mundane occurrences in life, yet there is a sense of joy and celebration that comes through in the lyrics and music. His own direct way of interpreting those events and then translating into music that is both catchy and thoughtful is what makes Young Man in a Hurry so intriguing. While also managing to maintain a groove that is head bob-inducing and in some cases even danceable, the band manages to tap into a sense of optimism as they use rock and roll to navigate experiences we all deal with in life.