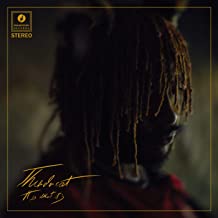 Thundercat has been crafting genre-bending music for years, but 2017’s Drunk was a break out record propelling Stephen Lee Bruner to a higher level. His follow up, It Is What It Is, is even better. Bruner exuberantly deploys his bursting at the seams electro-funk, but also adds a layer of emotional depth showing growth, maturity and a deeper sense of purpose.

The sequencing on It Is What It Is showcases the playfully vibrant nature of Thundercat’s past efforts and dynamic musicianship to start while saving the more serious, introspective numbers for the second half of the album. Mac Miller’s passing has weighed heavily on Bruner and he channels the pain of losing a close friend to great artistic effect.

Opening with the brief “Lost In Space / Great Scott” the record seamlessly flows into its first of many highlights, “Innerstellar Love”. Bruner showcases his gorgeous falsetto singing around excellent saxophone work and adventurously pumping jazz drumming, pairing gloriously with his funky flowing bass lines on a track that feels like it could extend on infinitely before it slowly fades away; an exhilarating sonic workout.

The good times kick into overdrive with the fusion hyper funk of “How Sway”, the dance laden party tune (that ends too soon) “Funny Thing” and the Mile High Club theme song “Overseas” before the best of the bunch “Dragonball Durag”  puts an exclamation point on the neon-colored vibes with its sticky bubblegum funk.

It Is What It Is finds Bruner’s expanding his lyrical base, the electro fusion of “Miguel’s Happy Dance” talks about trying to dance the pain away as there is a sense of questioning, loss and uncertainty behind the second half of the album.

“How I Feel” acts as the transition into dark terrain as Bruner delivers dramatic beats and philosophical words of warning on “King Of The Hill”, singing about bitterness between deep grooves. “Unrequited Love” finds Thundercat focusing on dynamite bass runs while reflecting on what could have been while “Fair Chance” keeps the vibe restrained as Ty Dolla $ign & Lil B join in on another affecting tale of heartbreak, loss and pain weaving in the title of the album like a mixtape in a tribute to Miller.

It Is What It Is wraps up with the short, tense “Existential Dread” before the overarching title track. The finale (with Pedro Martins onboard) is a dynamite two-part excursion that is searching, lonely and soaring finishing the top-notch album in a swirling movement of acoustic guitars, rich bass, funky drumming and a sense of wonder dedicated to Bruner’s departed friend.

The weight of loss, the pain of failed love, the bleakness of it all, combined with Thundercats effervescent playing, unique playfulness and a giddy sense of humor combine on It Is What It Is, resulting in the best album of Brunner’s career and one of the strongest of 2020.