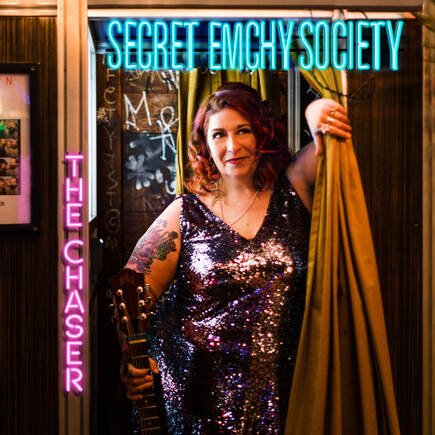 It’s the voice that hits you first. It’s big, a bit boisterous. It’s a voice that makes you grin, but it’s also sad and wise, and very observant. It’s a voice that stands you to a shot and a beer, kicks you out onto the dance floor despite your silly misgivings. It’s Cindy Emch’s voice – in every meaning of that word–that comes through on the pioneering queer-country singer and songwriter’s new album The Chaser.

Recorded with her long-running band, The Secret Emchy Society, The Chaser gives Cindy’s funny, deep songs an equally big voice. It’s a record of exact portraiture, country style. Cindy Emch knows how human beings behave when they’re in bars, when they’re lonely, and when they’re in love. And when they’re out of love. The Chaser is the work of an original who looks beyond Saturday night, toward an eternal present.

The Chaser finds Emch – the y was added by an emcee who couldn’t pronounce her name without another vowel – making a stopover in California country on a tour of modern, old-school country. Recorded at Cindy’s home studio in Oakland, California, the album embraces the totality of country: Nashville to Bakersfield, Houston to New Orleans, Tulsa to Oakland.

There’s no exact stylistic equivalent to the detail-packed rendering of classic country Emch & Co. delivered on The Chaser. Opener “Everything Was Fine” suggests rockabilly via the Sun Records licks producer-guitarist Tolan McNeil, who has worked with alt-country chanteuse Neko Case, brings to the table. (Some of The Chaser was done at McNeil’s studio in Victoria, British Columbia.) Secret Emchy Society has perfected their own allusive take on ‘60s folk-country.

Glide is thrilled to premiere the smoky and serene delivered “Howling Sober at the Moon” a back to the basics song that reminiscences of opportune late night/early morning occurrences. The Secret Emchy Society delivers with charismatic-well worn vocals that bridge the worlds of Marianne Faithfull and Doug Sahm.

“At its core, this song is about one’s chosen family and showing up for each other.,” says Emch. “About five years ago I was playing a festival up in the Canadian woods and had this absolutely mad and exhilarating connection with a songwriter/performance artist who was also playing the fest. Somewhere around 4 am, sitting next to a river, campfire burning, both of us fire-eyed with the buzz of our new friendship, she says to me – “a little lovin’ ain’t no crime.” And I knew I had found a kindred spirit. That’s really what it’s all about – finding your people and then showing up for them no matter what.”