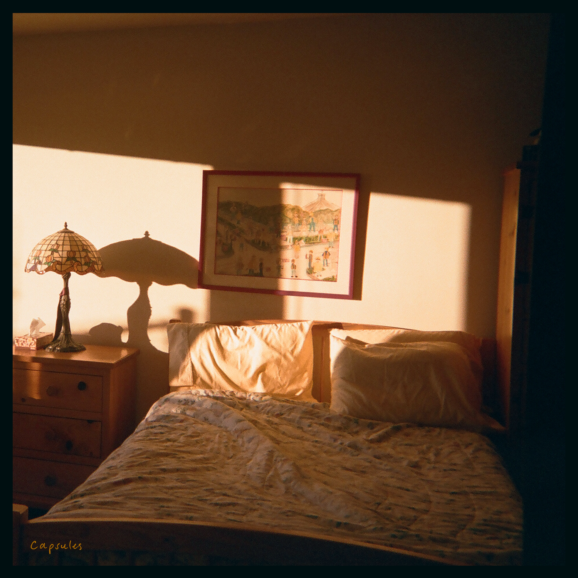 Hayfitz is the solo moniker of Los Angeles-turned-Brooklyn based multi-instrumentalist Brandon Hafetz. On his debut solo album, Capsules, (out 5/29), Hayfitz debunks the value of time, nurturing brief yet defining experiences into lush songs covered in vocals as delicate as they are determined.

The foundation of Capsules was recorded over eighteen days in a Seattle home surrounded by idyllic views of the Puget Sound and the region’s mountains and evergreens. The setting brought Hayfitz the emotional space to deliver the record with resolve, bringing intentional details to each song and distilling the franticness of a Brooklyn lifestyle.

Each inspired by contemporaries like Andy Shauf and Chad Vangaalen, Gregg and Hayfitz collaborated to bring a range of woodwinds to the recording process, with Gregg playing everything from bass clarinet to saxophone. Gregg’s added aptitude in both modular and analog synthesis formed the underlying soundscapes that created a cohesive record, running Hayfitz’s demo midi sequences through various vintage synthesizers.

From there, collaboration became a key component to the album’s finesse, with Hayfitz bringing eight friends and acquaintances into his DIY studio spaces over the six-month process, each collaboration painting a new layer of impactful, unfiltered work.

Check out Glide‘s premiere of “I Want”(below) a winsome track where we witness Hayfitz’ prowess for the ethereal and experimental, bridging the worlds of Jónsi, Jose Gonzales and Mount Eerie.

“This was written about both admiring and being terrified of what a new relationship can mean in your life. Two people very special to me ended up dating and I have a vivid memory of them just hanging out at one of the bars I was working at and being envious of how beautiful of a bond they’d formed. Especially in these current times where new relationships are all but impossible, and we can only admire those who are shackled up with those they are deeply in love with, “says Hafetz about the track.

While there have been many ways to interpret the sound of Hayfitz, he’s one not shy to lay out his own description of his hushed sound.

“I’ve been self-classifying my music as gentlefolk and trying to break as many layers of vulnerability down as I can in these songs – that’s what’s been really challenging me the most,” says Hafetz. “I’d be lying if I didn’t say Angelo de Augustine has been a massive influence as well as artists like Keaton Henson, Ry X, Adrianne Lenker, etc. as far as vocal influences go.”

With the turn of recent events Hafetz is hunkered down like many artists and at the end of 2019 decided to make music a full-time thing, but now, of course, a different route is being mapped. In the meantime, he hopes to play live again soon..

“My favorite shows to play are those with less than fifty people in a quiet and dim-lit space so I’m optimistic that we can start engaging in that way towards the end of this year. Beyond that, I’m spending this quarantined time writing a new record.”