SONG PREMIERE: Laura Cortese & the Dance Cards Deliver Celestial Song of Resilience Via “From The Ashes” 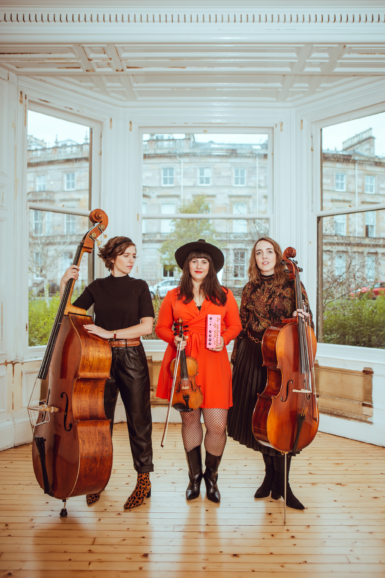 Expanding on the boundaries of what an indie-folk band can be, Laura Cortese & the Dance Cards take their extensive string music background, add their knowledge of folk and roots music, and incorporate an edgy pop sensibility to create their new album, Bitter Better. A stunning lesson in all the ways string instruments can be played – bowed, plucked, percussively – the album showcases Cortese and multi-instrumentalist producer Sam Kassirer (Lula Wiles, Lake Street Dive) striving to capture the most adventurous approach to each moment. The result is an album that incorporates dance-worthy foundational grooves, synth, and loops to push the boundaries of the genre. Bitter Better will be released on JULY 17 on Compass Records and the band has been invited to support The Mountain Goats on fall US tour dates.

“Everything is so heavy in the world right now,” Cortese says, who’s been living in Belgium the past two years. “When someone comes to our show, listens to this album, or hears one of the songs, I want it to feel like relief and release.”

Kassirer helped her sift through her cache of over 40 songs and encouraged her to form songs from her snippets, riffs, and ideas. For the first time, Cortese opened up the songwriting process to The Dance Cards collective. She exchanged ideas and songs with her bandmates remotely, and then enticed a few with the promise of Belgian delicacies to cross the ocean and flesh out arrangements. From recordings of the players beating on all sides of their instruments, Kassirer fashioned loops and created bass lines with members of the band. Lyrics were honed through group examination, with the goal of framing each story in the most impactful way possible to inspire empathy in the listener. The work was quick, but it was deep.

When it came time to record, the band and Kassirer joined forces with percussionist and engineer D. James Goodwin; together they completely dismantled the idea of how a string band “should” sound.

Glide is thrilled to premiere “From the Ashes” (below) a silvery and seductive track that combines baroque rock gallantry and celestial folk.  Atop exceptional production, Cortese offers a calming and cinematic voice that recalls the introspective stance of Aldous Harding and Big Thief. “From The Ashes” was written as a reaction to the devastating California wildfires. Cortese, originally from San Francisco, was inspired by the resilience of friends who lost their homes and drew from her childhood experiences to write this autobiographical song.

“In fall 2017, we toured through California weeks after the Tubbs fire that combined with high winds burned more than 36,810 acres and destroyed over 5,643 structures, including four friends’ home,” says Cortese. “What surprised me most was the resilience and strength I witnessed in these friends as they set out to rebuild their lives. As we sit here confined to our apartments and houses, I’m again struck by how quickly people have aimed for solidarity. What can we do for our neighbors? Are we calling our friends who live alone to make sure they aren’t truly isolated? Hundreds of online festivals have popped up intending to support artists & venue staff as well as bring a bit of joy into each other’s day. “From the Ashes” came from me thinking about all the ways things are torn down and rebuilt, including ourselves, in a lifetime.”