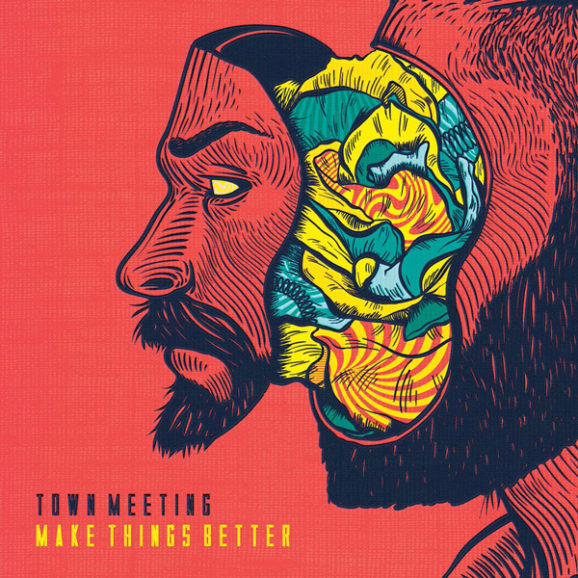 On the heels of Geography, Part 1, their debut EP, which spawned the mandolin-driven hit single, “West of Seattle,” and garnered rave reviews from the likes of No Depression and Songwriting Magazine, the band built a fervent following on the Eastern seaboard opening for Bob Dylan, Jason Isbell, Brandi Carlile, Old Crow Medicine Show, Willie Nelson, Kenny Wayne Shepherd, and Sturgill Simpson. From there, the group cemented their place among America’s finest up and coming new acts, performing at the New England Roots Fest, Levitate Flannel Jam, and the Adam Duritz curated Underwater Sunshine Festival in NYC while receiving an invitation to play Willie Nelson’s Outlaw Music Fest.

Luke reflects on the band’s pivotal third LP, 4th release overall, “This is the best album we’ve ever made. It’s our most honest and most passionate record by a mile. We pushed all our chips in on this one, and I think it shows.”

Glide is proud to premiere Town Meeting’s album’s closer, “Silence Speak” (below) – a timely call-to-arms, ones joined from a distance of six feet, hope born from belief. Mixing the tuneful jangle of The Avett Brothers with the jubilant indie edge of Lord Huron, Town Meeting, valiantly crosses the waters of roots music and then some.

“I like to believe that this song speaks (title pun intended) to a lot of things we’re all collectively experiencing currently and have experienced in the past,” says Condon. “I’m excited to share this single anyways because we had a lot of fun making it and we’re all really proud of it, but especially excited to share it right now because I think one of the underlying messages is that life is confusing and sometimes taking a pause, or a quiet moment, within the confusion, can be extremely beneficial.”