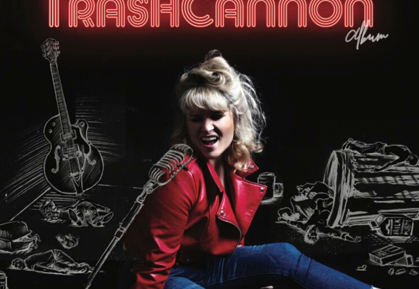 Caitlin Cannon was given her first guitar at the age of 13 – a gift from her grandmother. It was then that Cannon realized playing guitar wasn’t just for boys. That epiphany was a good thing not only for her, but for her new album The TrashCannon Album. The album is filled with references to the poor ways women are treated by men.

Of the album, Cannon said, “I’m repurposing my inner trash.” As you listen to the album, you realize that it has a very confessional feel, almost as if you have stumbled across her journal.

Cannon shows a sly wit in her lyrics. “Going for the Bronze” is a particularly good example. She tells the story of someone who worked hard in school only to end up pouring coffee. Furthermore, she has friends with Masters degrees who work at Applebees. She comes to the realization that “a pretty good GPA will get you into state” and that a “BA is just BS.” It’s a witty story with a catchy melody that will get people moving on a dance floor.

Occupations are a recurring theme on the album. In one dark rocker, she sings about a woman (her mom) who works as a hairdresser to earn money to visit someone (her brother) in the state penitentiary. Even if you didn’t know initially who the story is about, the story in the song hits pretty hard. “Barbers and Bartenders” is an ode to those who take good care of their regulars and do much more than they are recognized for. It is a particularly poignant song considering that we can‘t be regulars with our barbers and bartenders at the moment. The story of “Better Job” should sound familiar to anyone who has ever longed for a better station in life. The narrator of this story is someone who works behind a bar and clues you in to the sort of person a bartender has to deal with on a regular basis. She also realizes that she gets better tips when when wears shorter shorts, and wishes for something beyond that.

While her lyrics are thoughtful and witty, her melodies are spot-on also. She bounces easily from one style to another. “Toolbag” is a rocker with a piano part that would make Jerry Lee Lewis proud. “Pin Cushion” has a tinge of rockabilly like you might hear in a Dawn Shipley song. In general, she is pretty adept at crafting melodies that can get people moving, whether it’s on an old hardwood floor in a bar or in their living room.

This album is an enjoyable trip through the world of countrypolitan music. Cannon’s voice is by turns sweet, sassy, and big enough to fill an arena. She shows that not only is she a good singer and songwriter, but also a good storyteller.