The Persistance of Memory: ‘Eternal Sunshine of the Spotless Mind’ and the Importance of Acceptance

Two simple words, yet they perfectly sum up the concept of the film and form a part of one of the best scripts ever written, Eternal Sunshine of Spotless Mind. The 2004 film directed by Michel Gondry and written by Charlie Kaufman is a surreal journey into a world where people are able to erase a certain person from their mind, as did Clementine (Kate Winslet), an impulsive, quirky, free-minded woman.

Many people define Clementine as a “Manic Pixie Dream Girl,“ which could be true only if we ignored the complexity of her being. The term, created by Nathan Rabin in 2007, “Exists solely in the fevered imaginations of sensitive writer-directors to teach broodingly soulful young men to embrace life and its infinite mysteries and adventures,” Rabin wrote.  “The Manic Pixie Dream Girl is an all-or-nothing-proposition.“ It is true that Clementine is the one who takes the first steps and initiative in a relationship.  She also seems to be the fresh new start for her boyfriend Joel (Jim Carrey) but in reality, the script reveals the opposite. Not only is Clementine not someone who came just to save Joel from his loneliness and give him all the answers, she is the one who will create questions and eventually new obstacles.

“I´m not a concept, Joel. I´m just a fucked-up girl who is looking for my own peace of mind. I´m not perfect.”

Joel, the main male character whose memory journey we are following throughout the film, is a shy and quiet introvert. After the heart-breaking discovery that Clementine decided to erase him from her mind after their two-year relationship, he follows the same procedure and also erases his memories of Clementine. 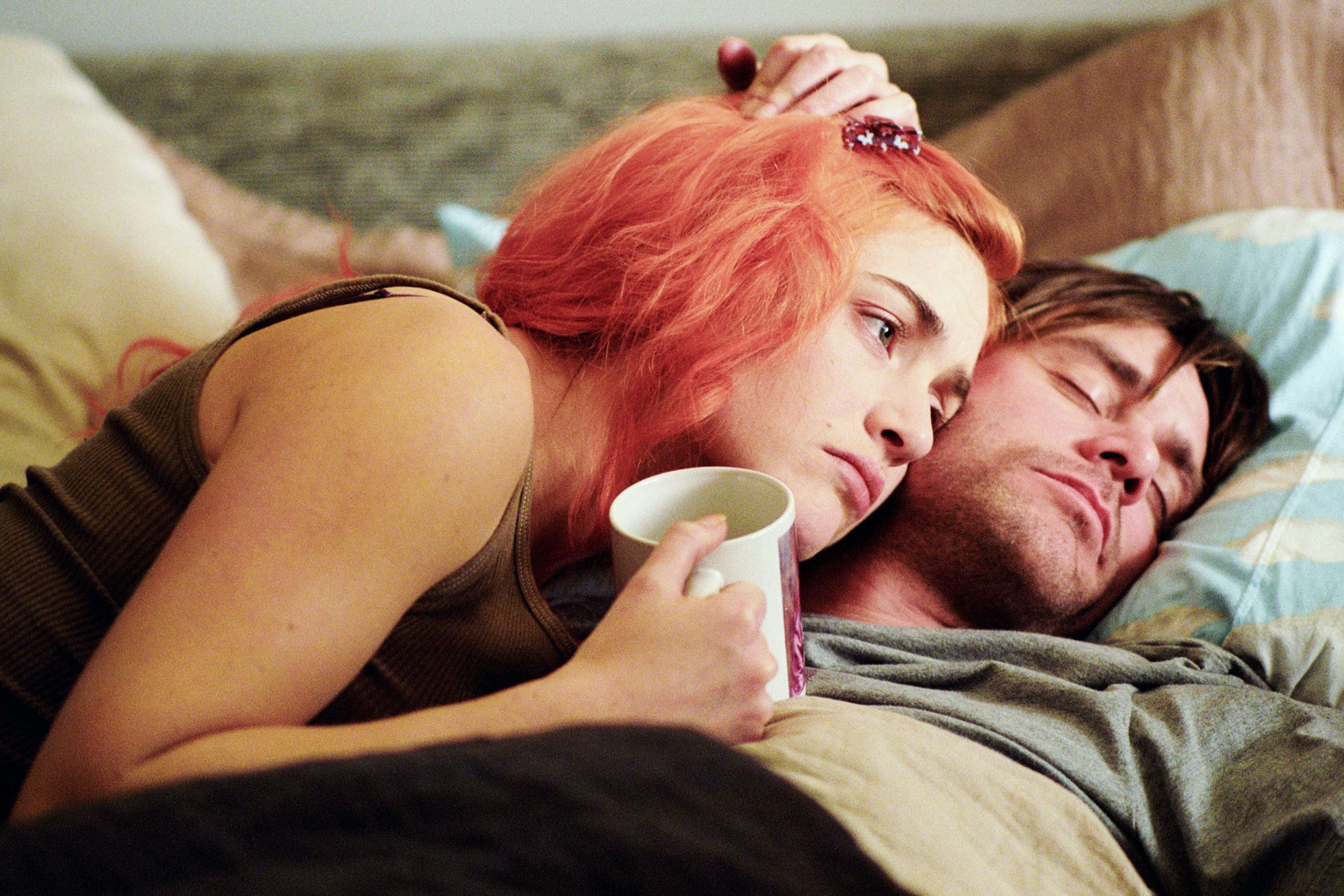 In the final sequence, after the procedure is finished, we see the first shot of the film again. Just as the plot itself shows how memory is influenced, Kaufman messes with the audience’s memory, too. We remember seeing the same scene of Joel waking up to find his car wrecked as well as his impulsive journey to Montauk, but this time we know more. It creates a parallel to the whole theme of the story, drawing everything together in a unique way. This film works as some sort of a repeating cycle, a cycle supported by Clementine’s hair color, used symbolically by Gondry and Kaufman.

Her never-ending color changes show her volatility, but also her state of mind and the state of her relationship with Joel. In analysis about the symbolism of these hair color changes Jeff Saporito talks about important function in a narrative. As we face backwards-facing trajectory of the film, the color of Clementine´s hair can place us in chronology so we don’t get lost in time and memories. On the other hand, her hair color also serves to show us the wisdom of the story and other symbolic clues on figurative and emotional levels. In Joel´s most recent memories we see Clementine with orange hair. This could possibly symbolise the autumn of their love. We see their arguments and misunderstandings. They grow a distance and accentuate each other´s differences.

As we go deeper into Joel´s memory we see the summer of their relationship symbolized by the red color. These memories are full of passion and joy. It is also a time where Joel, in his remembering, realizes that he doesn´t want to erase her, and tries to escape from the procedure. During his first meeting with her, Clementine´s hair is green which symbolises the beginning of something new and also the springtime of their love. And so, we come to the end of a relationship (and beginning of the film) where the colour is changed to blue. It seems to be the “death” of love. But this symbolism also creates a metaphorical cycle of life. Repeating seasons change and then come again. This idea transforms into destiny of meeting once again and starting over.

As Clementine and Joel meet again as if for the first time, each not remembering the other, they immediately fall for each other all over again. This is the optimistic side of the story. We cannot truly erase our natural feelings and what we feel for people. We cannot erase love.

We know more about their relationship and the same scene affects us all in a different manner, too. The characters are, at first glance, in new positions. Sitting together in a car, Clementine finds a tape that was sent to her and many others by Mary (Kirsten Dunst), who works for Lacuna, Inc., the company responsible for erasing people´s minds. After her painful discovery that she lived in some kind of illusion because part of her memory was also erased, Mary decides that she will not support the company where she works. These tapes reveal the recorded flaws of people who were about to be erased from one´s mind. As the tape begins to play in a background, we hear the negative points of Joel’s character. First confusion leads to sudden farewell. In this scene the tape recording is met with rejection. It creates a beautiful contrast to what will come. 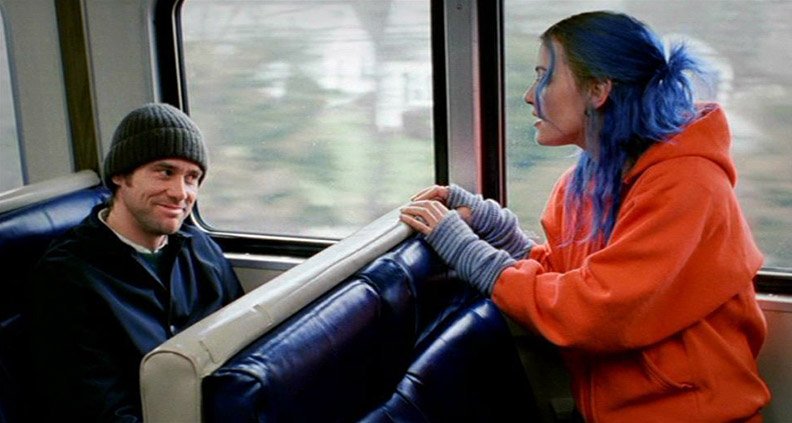 After both Joel and Clementine realize what has happened, they meet again in Joel´s flat. His voice from the tape uncovers all that he hates about the girl that has just entered in his room, Clementine. This voice is a reminder that although they again feel like the other one is a perfect completion of them, the truth is that nobody is. And this form of acceptance is what rings thematically.

We need to accept ourselves with all the negative sides as well as flaws of our partners. And the sunshine of our minds comes not by erasing what hurts us, but by including the pain and doubts into our lives and accepting it. Because relationships include both negative and positive memories, which we might often forget as time goes by, even though the cycle might repeat with the problems and misunderstandings again. The background voice recording feels like an unconscious inner voice, a reminder. Although, this time they put their relationship on a deeper level, they unconsciously realize their flaws and accept it.

“I can´t think of anything I don´t like about you right now.”

“But you will. You will think of things. And I´ll get bored with you and feel trapped because that´s what happens with me.”