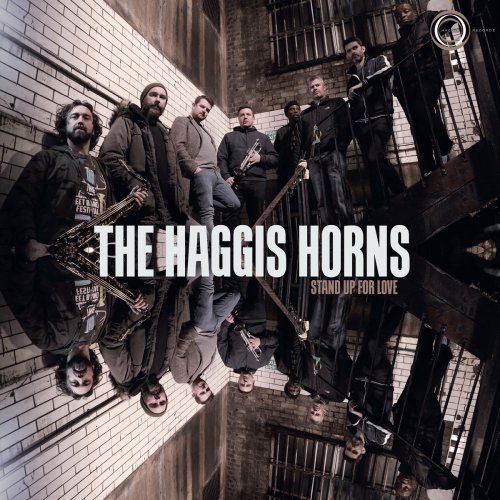 The Haggis Horns is a seven-piece funk band from Leeds. While the band is English, you don’t have to listen long to know that the members have spent a lot of time listening to American funk. Throughout its previous four full-length albums, the band has produced songs steeped in the funk sounds of the 70s.

The new album Stand Up For Love provides more of what you’d expect from this band – a sound that is rhythmic while heavy on the horns and organ. Oh, and if there is a prerequisite for this album, it’s that you be ready to dance whether or not you have a partner.

When you hear the opening track “Don’t Give a Damn”, it’s hard not to think about Average White Band. The similarity comes through especially in the horns, but you can also feel in the upbeat groove laid down by the rhythm section. While every member of the band contributes to the groovy feeling of the song, when you tune in to the bass, you realize that it is really the backbone.

Throughout the album, you get healthy doses of wah-wah guitar sounds, funky horns, and organ. And of course you can’t have a funk and soul album without a significant contribution from the rhythm section. If that weren’t enough, you also hear plenty of backing vocals akin to Robert Randolph and The Family Band.

In an album full of great songs, “Haggis Express” stands out. It is an ultra-funky instrumental that is easy to imagine as the theme for a cop movie based in the 70s. It’s also easy to imagine a room full of people dancing to this. Every part of this song gets you moving. If you have any 70s kung-fu sort of dance moves, you’ll likely be tempted to break them out when this one plays.

If there is a variation from the band’s typical sound, it can be found in the title track. The instrumentation in this is the same, however, the band steers in a more reggae and dub direction with this one. You can particularly hear the dub sounds toward the end of the song, which spins off into a psychedelic vibe. This is a great song for getting mellow.

With its upbeat melodies and groovy rhythms, this is a solid album for a party. If the point of a party (no matter where it takes place) is for people to enjoy themselves, this album will definitely help. Even if you’re having a party of one while quarantined in your living room, this album will get you moving and help you forget the world outside.