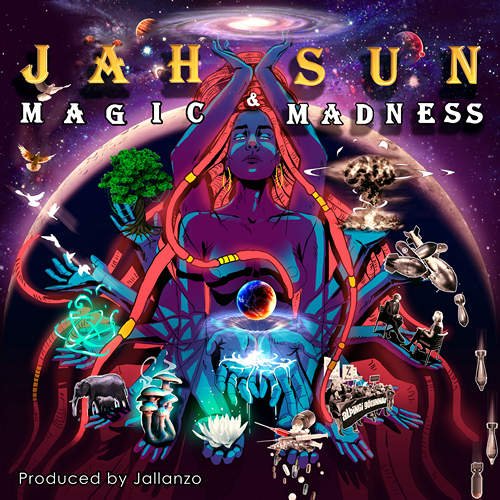 Jah Sun is a West Coast reggae artist. His new album Magic and Madness is his seventh full-length album, and it is a call for mindfulness and peace. Of the album, Jah Sun said, “One of the biggest takeaways…was realizing the synergy between me and my producer Jallanzo. We worked really well together and have that artist-producer magic.” He’s certainly not wrong about that. The proof can be found throughout the album.

Of the album title, he said, “I chose the title after a month-long tour in India. The region deeply inspired me. We truly live in a world of magic and madness.”

It’s not surprising to hear a reggae sing about love, as “One Love” has long been a motto of reggae artists. However, the first line you hear on the album is, “I’m calling out for peace and love.” In seven short words, Jah Sun delivers a manifesto for what’s going on in the U.S. right now. Granted, the line was written and recorded long before the current protests and chaos. Still, it’s amazing just how poignant a way that is to kick off the album. And the lyrics just keep coming. There are far too many to list in one review, so make sure that you pay attention to the lyrics of this one.

On the one hand, this is a pretty traditional dub album complete with dub versions of two of the songs at the end of the album. There certainly is a long history of bands that have employed this mellow, almost trancy sound. On the other hand, there is an occasional nod to hip-hop, mostly in the delivery of certain phrases. One example is when he sings “Nobody gets out alive” in “Tomorrow”.

Not surprisingly, you’ll find plenty of great rhythms on this album. The melodies are easygoing and range from somewhat psychedelic (and pair well with a substance of your choice, if you’re into that sort of thing) to positively buoyant. “Wasted Time” and “Sunshine” are two songs that beg to be played on a patio with some friends and cold drinks. That being said, the lyrics are really what capture the imagination. He writes thoughtful lyrics with messages of peace that can give you hope even now when it seems like the world is upside down. In fact (not that there have been clinical studies involving this album), it seems fair to say that even if you’re feeling anxious (you’re not alone), this might help put you more at ease. It’s pretty hard to be stressed out when you hear this album – even if the relief is only temporary. So if you could do with less anxiety and more groovy rhythms and meaningful lyrics, Magic and Madness is a good choice.