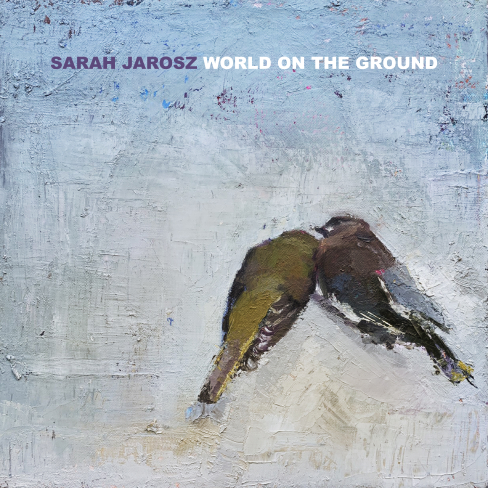 Sarah Jarosz was hailed as a bluegrass prodigy long before she even graduated high school. It was her skills as a multi-instrumentalist that initially gained her attention but she has since gone on to achieve success as a singer-songwriter.

The Texas native has released four solo albums, won three Grammy awards, and most recently garnered widespread acclaim as part of the trio I’m With Her, a group that features the equally talented Aoife O’Donovan and Sara Watkins. Now at 28 years old, she has teamed with producer John Leventhal (Elvis Costello, Lucinda Williams) and continues to move her music forward with the release of her fifth album World on the Ground.

The album was recorded in Leventhal’s New York home studio and finds Jarosz stepping away from the personal songwriting that dominated her last album, the Grammy-winning Undercurrent from 2016, in favor of focusing on the outside world. She found inspiration by looking back at her hometown of Wimberley, Texas, which led to a series of excellent story songs like “Hometown” where the characters are torn between staying put in one place vs. the pull of going out in the world. On the record’s catchiest track, “Johnny,” the narrator sadly wonders: “How could a boy from a little bay town/ Grow up to be a man, fly the whole world round/Then end back up on the same damn ground he started.”

“Maggie” is based on a classmate of Jarosz’s who she connected with at a high school reunion, who dreams of escaping the constraints of her tiny Texas town. “Drive across the desert in a blue Ford Escape/Hopefully this car will live up to its name,” sings Jarosz in a clear voice full of hope, set against a soft beat, and gently strummed acoustic guitar.

Jarosz, who now resides in New York, seems to view small-town life as a refuge from the chaos of the city. The album’s title is taken from “Pay It No Mind,” in which a little bird looks down at the ground and observes “When the world on the ground is gonna swallow you down/ Sometimes you’ve got to pay it no mind.” It’s a fitting piece of wisdom from an album full of honest insights. The theme is further explored in one of the most memorable tunes here, the lovely, piano-driven, “Orange and Blue,” a song she wrote with Leventhal that is a dreamy appreciation of nature.

Jarosz’s songwriting influences are evident as we hear echoes of Shawn Colvin on “I’ll Be Gone” and the traditional sounding banjo tune “Little Satchel” would be at home on a Gillian Welch album. Leventhal, proves the perfect producer for Jarosz, wrapping her words in a quiet, lush sound while leaning in a slightly more pop direction. The music is more textured than we’ve heard on her previous releases, but even when he is using percussion and electric guitar, Leventhal makes sure that Jarosz’s clear, impressive vocals are always in the forefront.

Overall “World on the Ground” is a work of quiet beauty that brims with irresistible melodies and compelling storytelling. These songs showcase Jarosz’s growth as a songwriter as they linger with the listener long after the album ends. Jarosz is clearly a shining light in the Americana world as her music continues to evolve, leaving us to eagerly anticipate her next move.