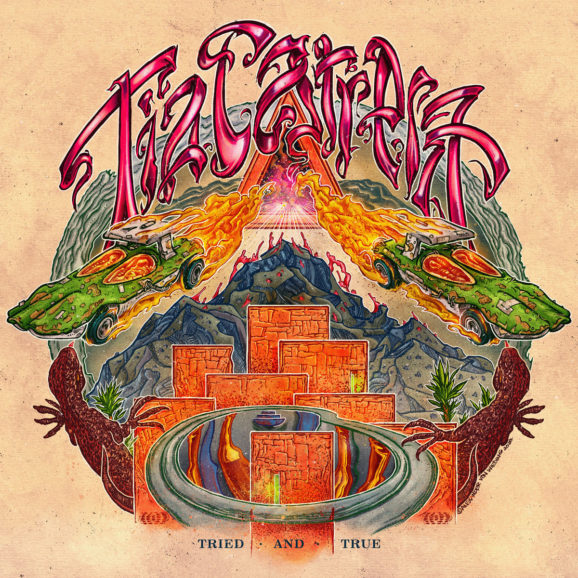 According to Tia Carrera’s bio on Small Stone, “A calendar page, never changed, hangs on the wall of a machine shop or a dingy dive bar. It’s 1970.” Frankly, listening to the band’s new album Tried and True, you’d have to believe that calendar hangs in Tia Carrera’s rehearsal space.

You have to give this band credit. While three to four minutes has always been the standard duration of rock songs, this band plays epic instrumentals. Three of the seven songs on this album are more than 14 minutes long. In that regard, the assumption that it’s still 1970 is a fair one because around that time Deep Purple was making songs that were similarly heavy and long.

Considering the length and the fact that these are all instrumental songs, this album certainly isn’t about a chase for radio airplay. Neither is it about subtlety. It has all the subtlety of a sledge hammer, and that’s not a bad thing. These songs are filled with heavy and fuzzy guitar riffs that will get your fist pumping. On top of that, you hear bass lines that are low enough to rumble your gut and assaults on the drums that will get you stomping your feet on the floor of your dirty old muscle car. “Swingin’ Wing” is a good example with the loud and fuzzy guitar, but it’s not just laying on the same riffs over and over. There is some serious shredding going on in this song. Meanwhile, the bass rumbles enough to be worthy of a Mastodon song.

So maybe you’re sitting there thinking, “A 14-minute instrumental song? Doesn’t sound like my jam.” You’re certainly entitled to that opinion, but you’re likely to find that these long and loud instrumentals are just the thing when you’re on a long road trip (even if you’re not driving a muscle car), particularly if there isn’t much scenery to enjoy on the way. In fact, you’re also likely to find that these songs cause you to press a little more firmly on the accelerator.

This isn’t only noteworthy because it rocks so hard. It’s also noteworthy because this band has managed to produce an album that will appeal equally to guitarists, bassists, and drummers. It’s true that you won’t get to sing along with any of the songs unless, of course, you create your own lyrics (which would be pretty cool). But you won’t mind the lack of vocals. The only thing you might mind is how sore you’ll be after grooving and pumping your fist to these seven songs.