If talent alone summoned notoriety and financial success, Kenny Roby would be the Michael Stipe of his scene. The former lead singer of jangly alt-country outfit 6 String Drag, is due to release his new album The Reservoir on August 8th. The album is significant for many reasons, and the most interesting one is that it involved his long-time friend Neal Casal as a producer, up to his unexpected passing last August. David Schools of Widespread Panic helped finish the project.

At a musical memorial to Casal in September in Port Chester, NY, they made final plans to convene soon with a dream team of players for a week in Woodstock in mid-October. Roby had culled 25 songs into 16, and the band captured many of them in only a few takes in the same room. The result is a fully-realized musical vision tackles themes of age, addiction, and anxiety, something that even the proudest souls are dangling with lately. 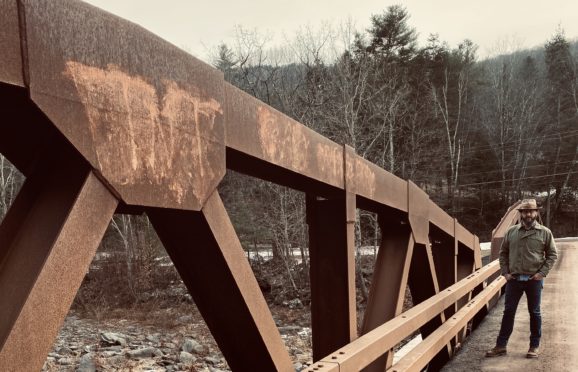 “Neal dying was tragic and traumatic for many of us,” says Roby. “But his death brought me deeper into my
recovery and into growing up and living for the day and knowing what I want. That’s been a gift.”

Glide is thrilled to premiere the official video for “Old Love” (below)- a song that Roby penned at that beginning of his marriage dissolving. With part of it filmed inside and outside NYC’s renowned Lexington Coffee Shop, Roby’s eminent vocals pour a graceful rainy night aroma to the musical presentation. Like Steve Earle and Townes Van Zandt, Roby has championed the drifters and lost souls of society- those that make the most soulful impression. “Old Love” stirs with that hard-earned aching soul, making him one of America’s most genuine songsmiths.

This was the first song I wrote at the beginning of the break up of my marriage. It was just a few days after the lightning bolts hit in the those initial conversations. I have no idea where it came from. I picked up the guitar and started strumming and singing the pre-chorus and chorus one morning. Then it just churned in my head after that for a few days and I wrote the two verses. Three months later it was the first song Neal Casal heard of this batch of new songs that would become ‘The Reservoir’ album.

He loved it. Then I sent him a demo of “Don’t Ya Know What’s On My Mind” and that’s when he called me and said he wanted to be involved in making a record of these new songs in some capacity.

When we recorded the song it was all live in the same room. I was doing live vocals with the intention of keeping them when possible but open to overdubbing the lead vocal on any track that wasn’t the live vocal that we thought was up to snuff. I think 12 or more of the 16 songs on the album are live lead vocals done in the room with the band doing the take. Most of the tracks on the record were done in a few takes.

So we did “Old Love” a few times and came in to listen to one of the first takes and we all agreed on it being the right band take and I said “this is great but I’m not sure about the vocal”. Dave Schools, who stepped in to produce the record after Neal’s death, said “I don’t know, man, I BELIEVE that guy”. Which is always the question to answer with a vocal. Do you believe the person singing? Is it authentic emotionally?

The other thing Dave would do after we’d come in from a take to listen to playback was to rub his arm to show that it gave him the chills. Then you knew you got it right. Technically solid vocal performances don’t hold a candle to authenticity. We aren’t trying to do math. We’re trying to share and invoke genuine emotion. Especially these days when fallibility and human flaws are rarely heard on records. This record was all about that though, and we decided to embrace the live takes as much as possible because they had the emotion and energy of being in a room with other humans and sharing your story without editing the vulnerability that comes with that.