There’s always something a little bittersweet in the air on the final day of Riot Fest (granted it could be all the collective body odor and/or weed smoke, but, talking about something a little more intangible here). It’s not just that a fantastic weekend of great live music is coming to an end, but it’s also that late September feeling that starts to creep in. You know, the feeling that those long carefree days of summer warmth are fleeting, and the chilly/damp days of Autumn are just around the corner. But on this final day of Riot Fest, there was really no time to waste on such wistful/corny seasonal reflections, as the lineup on tap, Sunday was simply too varied and engaging to take in passively.

Here’s recap of all the action from the final day at Riot Fest:

Body Count – Certifiable hip-hop legend/TV-star Ice-T and his provocative gangsta-metal band Body Count greeted the masses gathered in the hot mid-afternoon sun at the Riot Stage with a blistering cover of Slayer’s “Raining Blood”. If this was their way of letting it be known they were not there to fuck around, you could say they were successful on that front. Say what you will about rap-metal, but considering the band’s background/credentials, and the fact they were one of the first truly hardcore bands of that genre, what they may lack in memorable songs (outside the infamous “Cop Killer”) they more than make up for in authenticity (or at least before Ice-T became a millionaire/TV star, but nonetheless). Whatever the case, they delivered a convincingly abrasive set, and even performed “Point the Finger” (dedicated to the late/great Riley Gale from Power Trip), which was the highlight of their set for yours truly. R.I.P. Riley.

Fever 333 – Just in case Body Count didn’t satisfy your afternoon rap-metal fix, a band that personifies the new-school incarnation of that sound was also playing around the corner at the Radical’s stage. And although Fever 333 are new-school in the sense they have only been a band for about 4 years now, in a nutshell, they sounded an awful lot like the plethora of rap-metal bands that came out of the woodworks about 20 years ago as part of the Nu-Metal craze. That’s not necessarily a dig at Fever 333, they do offer a somewhat fresh take on that sound, focusing more on beats/electronic flourishes as opposed to riffs/grooves. They kind of sound like a more experimental/socially conscious version of Hed PE, but in any event, music tends to go in cycles, and given that it’s been so long since rap-metal was a popular subgenre, it almost felt novel to hear that type of music live again.

Anthrax – Transitioning to a more traditional version of metal (although Anthrax did have a pretty good song with Public Enemy back in the day), thrash-metal veterans Anthrax hit the Roots stage around 5:00 to a sea of fans eager to bang their heads and get “Caught in a Mosh” (which was the highlight of their set btw). While Anthrax is considered part of the original “Big 4” of thrash metal bands that came to prominence in the 80s, they’re not always as appreciated as much as the more infamous bands in that group (i.e. Metallica, Megadeth, and Slayer). But that was far from the case Sunday at the Roots stage, as the band received no shortage of love from a packed crowd of enthusiastic fans. The enthusiasm was certainly well earned, as Anthrax delivered an impressively energetic set for a band that’s been at this thrash-metal thing for about 4 decades now.

Devo – Across the large field separating the Roots stage, another legendary 80s band of an entirely different variety hit the Riot stage shortly after Anthrax’s wrapped up their set. Perhaps “entirely different variety” is a bit of an understatement: Devo might as well have been from an entirely different planet altogether. And what a wonderfully bizarre, hilarious, and all-around brilliant place Planet Devo must be. Granted, most people are at least vaguely familiar with Devo’s inherent weirdness based on their hit song “Whip It”, but of course that song (while a good microcosm of Devo’s sound) only barely scratches the band’s eccentric surface. And if the fans in attendance didn’t know that before Devo’s set Sunday evening, they certainly do now. Simply put, Devo was absolutely clicking on all cylinders, delivering their quirky brand of new-wave punky art-rock in an exhilarating fashion. The audience (including this reviewer) was eating it up, and combined with their absurd outfits (which they changed on at least 3 separate occasions), along with their bizarro lo-fi backing visuals/videos, and just the delightfully infectious nature of the music, it was impossible to not either be grinning ear-to-ear, laughing, or bopping around for the vast majority of their captivating set. There were even some incredibly goofy “moshpits” that broke out during a few of their songs, which was quite remarkable considering the nature of Devo’s music, but it was all in good fun of course. For yours truly, it took several years to really “get” Devo, so while my expectations for their set were certainly high, they somehow managed to exceed them. All in all, it amounted to perhaps the best performance of the entire festival. Long live Devo!

Flaming Lips – Continuing the ping-pong between the two main stages, most folks migrated back to the Roots stage to check out the Flaming Lips, who went on almost immediately after Devo beamed back to their whatever (awesome) planet they came from. While most bands offer up theme music of some sort for their intro, the Flaming Lips’ intro basically consisted of Wayne Coyne delivering a somewhat rambling speech (with his patented burnout charm) about COVID (nothing particularly enlightening, but generally hopeful/endearing in nature) whilst climbing into his trademark inflatable bubble. The broader band then kicked things off with “Race for the Prize” off their (arguably) best album The Soft Bulletin, which was of course accompanied by their infamously trippy visuals, etc.. The band delivered a quality set of their tried-and-true brand of psych-rock and even threw in a few old-school jams like “She Don’t Use Jelly” for good measure. If you’ve seen The Flaming Lips live before, you know they put on a mesmerizing show, and they certainly did not disappoint on that front Sunday night.

Slipknot – And then, in what might have been the most schizophrenic back-to-back pairing of bands in the entire history of Riot Fest, across the field back at the Riot Stage, with a full moon rising overhead, a band that felt like the absolute anthesis of The Flaming Lips and Devo took the stage to close out the festival. That band, of course, was Slipknot, and regardless of what you might think of their distinctive brand of mall-core death-metal, one thing is for certain: they are a force to be reckoned with in a live setting. Yes, to be in the thick of the crowd during a Slipknot show is somewhat akin to what a blade of grass must feel like as gigantic lawnmower proceeds to pulverize you and your fellow grassy brethren (i.e. the audience) into oblivion. Half-baked analogies aside, you probably get the ideal: Slipknot’s relentless pummeling assault is quite an intense experience. It’s kind of like the aural equivalent of seeing a slasher movie if that’s your thing. It’s intense, it’s visceral, but it’s also maybe a little cheesy seeing a dude in monster mask screaming/barking out self-loathing/misanthropic rants with a backing band of other dudes in “scary” costumes/masks and the like. But hey, it’s all in good fun, and Slipknot’s visual shtick aside, the power and force of their music are undeniable, especially in a live setting. Just ask those in attendance Sunday night, who bore witness to one of the most intense closing performances in Riot Fest’s storied history.

It was a fitting way to close things out, and Riot Fest really deserves credit for making the best of a tough situation. Between all the cancellations, overall Riot Fest still (remarkably) managed to string together an impressive collection of artists to create a truly memorable and eclectic festival experience for their fans. 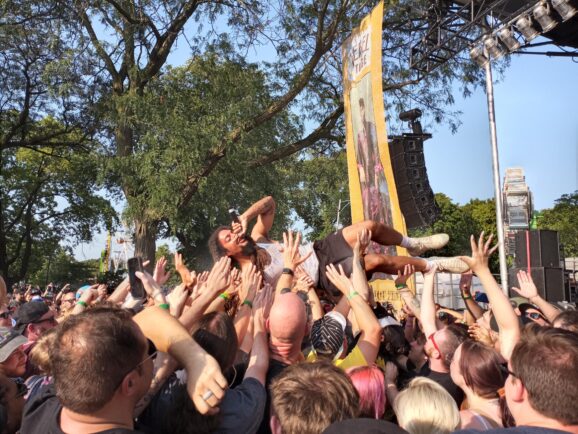 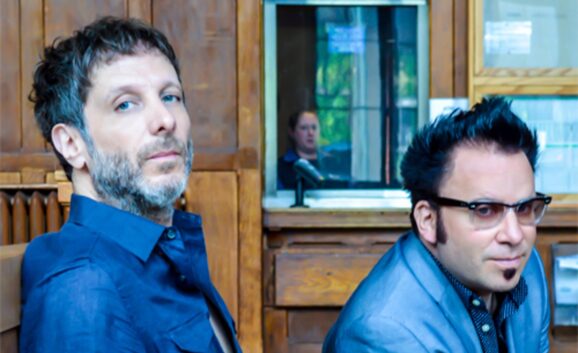