We are very familiar with the actor, Kevin Costner. Costner has garnered two Academy Awards, two golden Globe Awards, a primetime Emmy Award, and two Screen Actor Guild Awards. He has starred in more than 60 movies, as well as several television miniseries. He is presently starring as John Dutton in Paramount’s very popular television drama series, Yellowstone. Costner’s accomplishments span over the last 40 plus years and continue on.

Costner, as a singer/songwriter, has alluded the bulk of the population during the years. He started performing music in his high school marching band like many of us. His flourishing acting career put a halt to his musical aspirations until he formed a country rock band in the mid 2000s with the encouragement of his wife and his friend John Coinman.

Costner and the band, Modern West, released their third album of original material, Tales from Yellowstone, in 2020. They were unable to tour to promote the music due the pandemic until August of 2021. The bulk of his performance at the AVA Ampitheatre in Tucson actually had taken the majority of their songs from their 2008’s Untold Truths and their other early works.

The show started with a collection of Costner’s many film roles displayed on a screen in back of the stage. This was just in case you didn’t remember the actor’s movies. Costner took the stage at the end of the filmography.

Costner opened by thanking the women in the audience for bringing their husbands/boyfriends along to the show as he insinuated that the men would not have otherwise come to the show. It was puzzling since his music was not necessarily gender specific. It felt as though he thought of himself as a chick magnet when ultimately this didn’t seem to be the case.

All of the songs were written by Costner and they seemed to be new songs to the crowd since Costner has never had any radio hits. To his credit, Costner gave lengthy introductions to each song explaining the genesis of each tune. For instance, Costner said,” My journey has been a little different. I came from a very conservative background. Wasn’t sure what I was going to do. What I was going to be about. I had a feeling, but it wasn’t something I could whisper to my family. It was such a conservative place and I thought I might have just one job just like my dad did. But as I found my way, I worked on fishing boats, I drove trucks, I painted houses. Those were the jobs I thought I might do, but it wasn’t the ticking of my heart. I went to college. i went to the only one I could afford. It was about 98 bucks. It was a state school in California. Thank God, I wasn’t sure how to write an essay.“

“I guess I was a day dreamer which was code from my dad who was from Oklahoma that I was a slacker. He knew I knew how to work.  I just wasn’t sure that was the work I wanted to do. I was pretty envious of people in college. They knew what they wanted to do. You’ve probably known the same kind of people going into the family business or you really know what you want to do. The ones who knew what they wanted to do were great. The ones that were really good in college, they were really good. I was just really off. I finally heard the ticking of my heart. I knew I had to make a move. I remember his head hitting the kitchen table so damn hard and when he came up (His dad) the questions didn’t stop about how I might go forward, how I was going to do it, and who was going to help me. I realize it was because he was just afraid and he didn’t want to be embarrassed and he had that nightmare that as a father about how he would be able to help his son” said Costner.

“As things progressed for me, I came to him again and said ‘I have a new idea.’ He said, ‘Really? What?’ I’ve been thinking I would like to direct. I believe his head hit that kitchen table harder, He came up and said. “Kevin, this acting thing is going really good. I don’t know why you would want to mess that up.” So, when I came back to music, I came back through John (Coinman). The last person I told I would do that was my father. I thought I would just let him catch up and I would be 90 miles down the road. I’m sure it would be the same for you when you decided to change your life. The people you love the most can almost hold you back. This song is a little bit of a metaphor for my life. The is called “90 Miles an Hour,” added Costner. The introduction for each song was similar.

The band, Modern West, was spot on. They played with expertise equal to any multi-platinum country band. Costner did not do band introductions.

After the last song was played, the band left the stage. Costner remained behind, and after being handed a bottle of champagne and a glass, he shared multiple toasts with the cheering crowd that stayed behind. The show was a little bit country, a little bit rock and a whole lot of Costner. 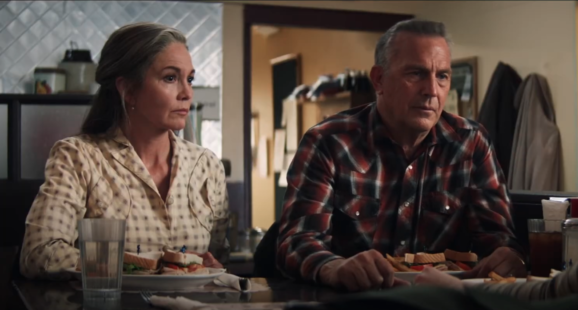 ‘Let Him Go’ A Taut and Thrilling Neo-Western (FILM REVIEW)