VIDEO PREMIERE: Lord Nelson Push Through the Darkness with Alt-country Rocker “Drag Me Down”

When it came time for Lord Nelson to get back into the studio to make a new album, the band wanted to lean into exactly what’s garnered droves of fans and thousands of streams of their songs throughout their career: a burn-down-the-house live show. With two previous studio records under their belt, the Charlottesville-based band were looking for a way to create a calling card for their boisterous live act, something that would bridge the gap between studio and performance, so they took a batch of road tested songs into the studio with a very simple goal in mind and achieved just that. The resulting album, Transmission, will be released January 21st.

For the first time, this Lord Nelson record features three writers and vocalists, with brothers Henry and Calloway Jones contributing to Kai Crowe-Getty’s set of songs. Rounding out the group are Andrew Hollifield and Niko Cventanovich on bass, Johnny Stubblefield on drums, and Dave Pinto on pedal steel and harmonica. The collection of songs marks a wide range of stories and characters, but there is a creeping lightness that settles around the edges of what could be darker themes in other hands. From car crashes, murder, bank robberies, devotion, trucks in lakes, drug busts, and relationships, to hope, triumph, and overcoming the odds, this record engages a wide view of the human experience.

Using a converted barn to track the record, guitarist Calloway Jones and collaborator Ivan Barry engineered two sessions across a few weeks, and the bones of an album were fitted into a suit. Lord Nelson initially worked to move through recording quickly as to release Transmission and get back on the road. Like the rest of the world, those plans came to a sudden halt with the pandemic. The band wondered, “Does the world need this music now? Will it ever see the light of day?” But finishing vocals in blanket forts, tracking guitars in an old farm house, and sending the sessions to friends to record parts enabled this process to grow and change slightly with the enforced break from touring. It allowed the band to pause and take in the songs and choices with a bit more thought. It changed the work and brought a reexamination. But ultimately, this record intends to bring people together—to dance, sing in the car, hum along, crank up on the stereo, and to stop taking life too seriously for a few minutes.

Today Glide is excited to premiere the band’s video for “Drag Me Down,” one of the standout tracks on the new album. Blending airy rock with alt-country grit, the song brings to mind the folksier offerings of Tom Petty. Injecting the tune with a Southern rock twang reminiscent of the Drive-by Truckers, the band maintains a strong momentum that complements the lyrics that urge the listener to push on through dark days. In an interesting artistic choice that provides a contrast with the band’s rough and tumble sound, the video features an interpretive dancer to make for an oddly soothing visual. With its big chorus and bigger rock sound, “Drag Me Down” encapsulates what makes Lord Nelson a band that is well worth catching live.

“Like so many things over the past year, this video was the result of creative ideas based on limited access to full production. When we anticipated releasing this record pre-pandemic, we played a local show and filmed most of the songs for future live videos around the album, but they sat on the shelf for almost two years. Working with the accomplished dancer Alanna Mahon, we fused the live shots with a beautifully choreographed routine that she executed wonderfully. The lyrics of the song are very much directed towards someone who only sees fault and cynicism in their world view and Alanna’s performance brings a taut energy to this conceit, while allowing joy to escape. Not knowing at first if these visuals would work together, we ended up being really pleased with the final product and all the folks that helped bring it to life. Dancing through the darkness, looking for cracks in the facade; it’s a daily routine.” –Kai Crowe-Getty (vocals, electric and acoustic guitars) 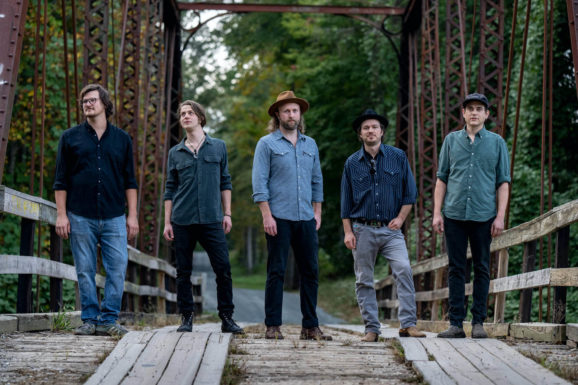