The 19th installment of Alice Cooper’s Christmas Pudding was a relentless barrage of high-energy musical entertainment at Phoenix’s Celebrity Theater.. Two long years have passed since the previous Alice Cooper Christmas Pudding. That is a long time for an organization that depends on two events to fund Alice Cooper’s Solid Rock Teen Centers. The mission of the teen centers is to get teens off the streets and teach them music, art, and dance at NO charge. Cooper and his wife canceled last year due to both contracting Covid-19 prior to the event.

Two years ago, there was only one teen center, but, somehow during a pandemic, another teen center was established in Mesa, Arizona. In addition to Alice Cooper’s Christmas Pudding, Cooper sponsors and plays a golf tournament in the spring to raise funds for the centers as well. The golf tournaments continued during the pandemic.

The five-hour festivity began with the teen center’s Bucket Brigade giving an animated percussion performance using five-gallon plastic buckets. The Solid Rock Dancers followed up with a glance of music history from ‘big-band’ jazz to “Uptown Funk.” Sheryl Cooper made her Pudding debut as a dance performer. She is spectacular, but we already knew that since she performs as the ‘mad’ nurse during Cooper’s concerts.

This year, Cooper’s Proof is in the Pudding talent contest had a tie for first place in the band category. Both KOZA and The Sinthrics played for the crowd. Both bands had excellent lead singers performing.  The solo performer honors went to Isiah Tilson who gave the fans a cover of Queen’s “Crazy Little Thing Called Love” and an original song.

Kudos go to Nashville’s band Sixwire that backed up all of the headliners for the night. One would have never known that these musicians didn’t work with the headliners permanently.

The first headliner to take the rotating stage of the Celebrity Theatre was Sugar Ray’s Mark McGrath. He made a bombastic entrance that continued throughout his set as the ’90s star proved his songs still carry some weight that included: “Every Morning” and “Fly”.

People may ask where The Young Rascal’s Felix Cavaliere is now. The 79-year old was in Phoenix on this night singing hits like “It’s a Beautiful Morning,” “Groovin’,” and “Good Lovin’.” The crowd knew the words to his songs proving they have reached classic standards over 60 years. Cavaliere’s were in amazing shape and it was great to experience a representative of rock history ‘in the flesh.’

Collective Soul’s Ed Rowland got the crowd back on their feet slashing through his gritty performance of “Shine” “Heavy” and “December.” Roland seemed physically unable to be still during the set and that was a good thing. The wild crowd responded with massive singalongs while he proved his post-grunge song catalog is still viable.

Ace Frehley returned to The Christmas Pudding with his bodyguard in close proximity wearing a jacket straight out of New York’s Modern Art Museum. His performance was a reminder of how he inspired an entire generation of guitarists playing with feeling and virtuosity. He churned out outstanding versions of “Shock Me,” “Parasite,” and “Cold Gin,” showing KISS aint the same without the Spaceman on lead guitar.

Orianthi is a former member of Cooper’s touring band and his band stepped in to back her up. There was a familiarity seen between each of them during her set. Fans were able to experience her singing and her impressive guitar work with “Contagious,” “Sinners Hymn,” “How Do You Sleep,” and “Purple Haze.”

Cooper finished the night setting the stage with “Under My Wheels” and “No More Mr. Nice Guy.” McGrath joined Cooper on stage to play tambourine on “Schools Out.” Before the song was over, McGrath was on his knees in an ‘I am not worthy’ position. Cooper played along offering his hand for McGrath to kiss. Orianthi joined Cooper during his set for “I’m Eighteen.” Cooper pulled out his blues harp for “Fallen in Love.” The show was closed with Chuck Berry’s “Run Rudolph Run.”

There were multiple auctions of rock memorabilia interspersed in between the sets peddling autographed guitars that sold for thousands of dollars. The most impressive piece was an image of Cooper done entirely of guitar picks that sold for $120,000. All items had been donated to Solid Rock. 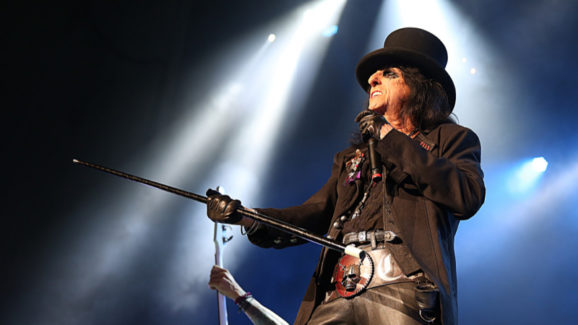