The one thing you know for sure when going into a Guillermo Del Toro film is that he does not give a fuck about the standards of cinematic convention. He, perhaps more than any other filmmaker working today, makes movies precisely for an audience of one. Whether or not anyone is on board with him beyond that is none of his concern.

This is probably about what you can expect from a guy who crafted a beautiful love story between a deaf woman and a fish (and won Best Picture for it) and realized the dream of an elevated superhero story decades before the concept was part of the cultural discourse. Del Toro is a filmmaker of singular vision and we’re all just lucky that his vision is so damn brilliant.

So it is with his latest work, Nightmare Alley. Based on a book of the same name by author William Lindsey Gresham (which was previously filmed in 1947 by director Edmund Goulding), del Toro has created a work of powerful vision and vibrant humanity. Haunting and glorious, the film represents a bold direction for a filmmaker who thrives in playing in untapped sandboxes.

Bradley Cooper stars as Stanton Carlisle, a man on the run from his past and the law by taking work with a traveling carnival. Happy with grunt work, he soon learns the tricks of mind-reading trade, becoming something of a talented spiritualist in the process. With big dreams, he and fellow carnie Molly (Rooney Mara) strike out on their own with a mentalism act, conning crowds with deft displays of spiritual conning. Soon, however, the pair runs into Dr. Lilith Ritter (Cate Blanchett), a psychologist with some tricks of her own who seems determined to knock Stan down a few pegs.

A carnival is the perfect setting for a director like del Toro. Under his vision, the old-timey carnival is brought to vivid life. You can almost smell the popcorn and taffy wafting through the screen as the director takes us through the bevy of attractions of rides. He’s helped in his efforts by one of the best support casts assembled in recent memory, including Ron Perlman, Willem Dafoe, and Toni Collette. The carnival imagery is strong and intoxicating.

That said, del Toro’s real talent is in creating human stories. Whether it’s making us believe in the romance between a woman and a sea creature or making us believe that a young girl is escaping fascism through a fairy tale world, del Toro makes movies that, for all their darkness and bold imagination, focus on humans and human issues. Nightmare Alley is no different.

Del Toro and co-writer Kim Morgan have concocted a brilliant, noir-tinged script that ultimately explores the darkest corners of the human soul. Cooper does a phenomenal job of piercing this heart of darkness, giving us an incredible view of the highs and lows of human existence. Much has already been made of his brief performance in the upcoming Licorice Pizza, but here we see Cooper at his absolute best.

At times, Nightmare Alley feels like a timeless classic from a bygone era of filmmaking. Del Toro pulls equally from the golden age of film now and modern techniques, creating a uniquely gorgeous film that revels in its artistry. While it probably won’t convert any del Toro naysayers it is sure to give fans everything they want from a del Toro film. Shock, despair, beauty, and brilliance, Nightmare Alley never stops delivering on its promises.Nightmare Alley is now playing in theaters everywhere. 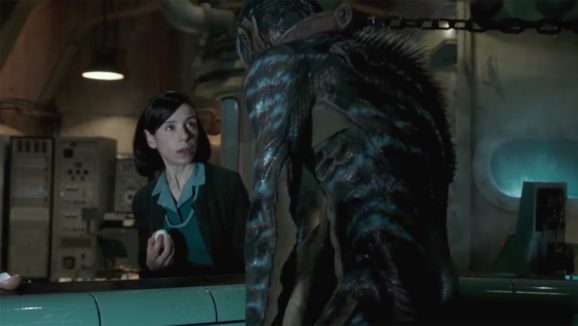 ‘The Shape Of Water’ Is A Majestic Cinematic Dreamscape (FILM REVIEW)